So It DOES Exist!

As I began my (re)comic journey, I always knew that the 1990 Spider-Man number one, by Todd McFarlane, would be on my MUST HAVE list. Though I told myself, "I'm going to get EVERY variant there is of this book," I also realistically didn't think that would ever happen.

It became all the more obvious that the numerous different copies would be all the more elusive to me as I researched just how many there were. Fourteen, to be exact. Sixteen if you count removing the original green cover / purple webs, and silver cover / no printed price, from their original polybags as alternate variants. Which I did. 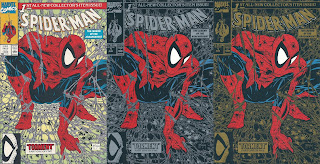 Obtaining most of these wasn't actually difficult. We are after all talking about a book that printed and sold over two million copies. They're out there to be found, that's for sure. I grabbed what I could, picking up five different variants from various sources between October 11th and 23rd of 2019.

Though I had the basics in my hands, there were still a whole bunch more missing from my collection. Of them, there were six variants that I didn't think I would ever be able to get because of a combination of price and scarcity. One of them was so rare, I had never even heard of it before, let alone see one. 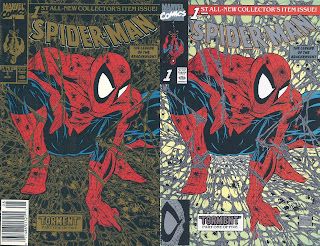 Fate intervened on the night of October 28th, 2019. As I perused ebay, I came across a massive listing which contained several variants of issue number one. Among them were two of the three rare books. These were the Wal-Mart exclusive gold reprint with bar code, and the book I'd wanted since a child, the platinum edition. Though the listing is long since taken down, I want to say there were at least six different covers in the lot. The price was high, but oddly, so much lower than I would have ever expected. To put it in perspective for you, you wouldn't even get the platinum cover these days for what I paid. 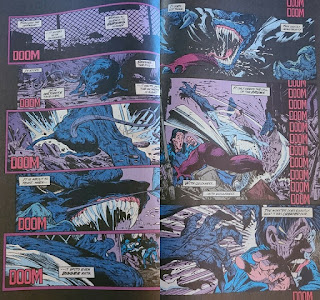 My brother would come through as a Christmas gift in 2020 on the third high priced variant, the silver cover blue lizard error. Believe it or not, I actually had this version as a kid, and I paid no more than five dollars for it from a back issue bin. It was actually the ONLY silver cover version I owned.

March 18th of 2021 would fill in two more gaps, when I had and jumped on the opportunity to pick up the two autographed versions red stamped by The Spider's Web, a comic shop which McFarlane had a stake as part owner in.

With that purchase, and the fact that I still had no real confirmation that the last version on my list even existed, I considered my collection complete.

As I sometimes do, I was perusing ebay for "cheap" copies of issue number one to potentially pick up, because for some reason I seem to need all two million copies in print. But, that's a story for another time. For this day was about to bring with it an eye popping double take. As I scrolled through page after page, I saw an auction title which I never thought I would ever see. 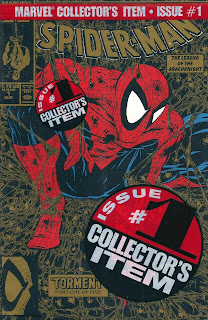 Wait, what? Is this for real? Is the polybag legit? Or was it a re-sealed "hand-made" variant? As I compared the listing to that of the only known photo I had ever seen of this version, all signs were pointing to authentic. The price tag also helped solidify this.

Within the seconds it took me to do all of this, I nervously fumbled through the "Buy It Now" process, hoping in the back of my mind that this wasn't going to be one of those G.I. Joe Classfied pre-order type scenarios. You know, how you get it in your cart, go to checkout, and by the time you pay it says, "SOLD OUT!"

Fortunately, it was not.

The purchase was completed, and within five short days (thanks to a weekend), the book was delivered to my doorstep. As I scanned it over, taking in every inch of it with wide eyes, I was transported back to my childhood, feeling that giddy excitement of holding a variant copy of Spider-Man issue one. I also saw no reason to doubt it's legitimacy. This was indeed a polybagged sealed gold edition. A true holy grail.

This book is special to me in so many ways. Yes, it's a variant I didn't know for the longest time if it actually existed, but it also marks a fantastic end to a journey I started on in 2019. It's the full completion of my collection of covers for this landmark book, and one I never imagined I would ever cross the finish line on.

Will I still buy copies of issue number one? Yes, of course. If the price is right. I have an unhealthy obsession with this particular comic book, and wouldn't bat an eye at an opportunity to own a complete long box full of the various variants. This is the comic that made me a comic book collector all those years ago.

Click "HERE" to go back to the home page. For more posts related to this one, please click the labels below.
Posted by The Toy Box on June 21, 2021
Email ThisBlogThis!Share to TwitterShare to FacebookShare to Pinterest
Labels: Gold, Marvel Comics, McFarlane, Polybagged, Second Print, Spider-Man, Spider-Man 1990