By the time Gary Numan went solo in 1979, he had already released two albums with his band, Tubeway Army, which featured Numan on Vocals, Paul Gardiner on bass and Jess Llydard on drums. Though Gardiner would stay with Numan's solo iteration, Llydard would be replaced by Cedric Sharpley. Additionally, Chris Payne would join to fill the role of keyboardist.

Numan is of course known for his most popular song to date, Cars, a new wave synthpop treat. Because the time of it reaching the charts, number eighty-nine in February of 1980, Cars is often times mistakenly categorized as an 80's song, despite being released on Numan's 1979 solo debut, The Pleasure Principal. Cars would eventually crack the top ten, but not go any further than number nine.

Unlike many Retro Spins artists that I review, Numan is one of the few who remains active to this day, with his latest album, Intruder, slated for a 2021 release. Though personally, I've not heard anything from him, with exception of the above noted song. 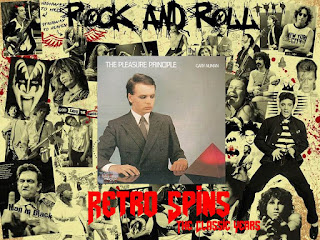 And, it's because of said song that I'm here today listening to the album it's from, which just so happens to be Numan's first solo debut...which I think I said already.

Here's the thing. If you love synthpop, you will probably really like (or love) this album. It's new wave before new wave was really a thing. While I heard some tracks that intrigued me, nothing really stuck for me, with exception of the song I bought the album for, which again, was cars.

Numan has somewhat of a whiny voice, and it can actually grate on your nerves if you dwell on it too much. His music is by no means any form of masterpiece, heck, even cars is a pretty generic song, but it's catchy. I think this is what perhaps he thrives at as an artist. Simple songs that have catchy hooks.

I went ahead and read a listing of Numan's, "greatest hits", to see if there were songs I perhaps knew of, but had forgotten. I didn't recognize any of them. Suffice to say, I'm content with the song I bought this album for, and don't see myself branching off any further in his music.

Disclaimer: They Toy Box does not endorse or contribute to piracy. Retro Spins posts are intended for educational and entertainment purposes only. None of the music discussed here is available for sale, downloading or distribution.
Posted by The Toy Box on June 09, 2021
Email ThisBlogThis!Share to TwitterShare to FacebookShare to Pinterest
Labels: 1973, 70's Album Review, 70's Music, 70's Music Review, Gary Numan, Music of the 70's, Retro Spins, The Pleasure Principle