Johnny Cougar, John Cougar, John Cougar Mellencamp or John Mellencamp. Whatever you call him, the man had a rocky start in the music industry with his debut album selling only twelve thousand copies upon its initial release. It was so bad that not only did his record label drop him, but they refused to release his already completed second album, The Kid Inside (which would ultimately end up being released as his sixth studio album).

Leading up to his debut, Mellencamp signed with then David Bowie manager, Tony DeFries. However, DeFries was adamant that nobody would buy a record for a man named John Mellencamp, and without the singer's knowledge, changed his name to Johnny Cougar. Mellencamp would not find out about this until he saw the final product of his debut album. The irony ending up being that people apparently wouldn't buy an album for someone named Johnny Cougar either.

Despite this setback, Mellencamp was able to secure a new record deal, and released his second album, which was actually recorded third, A Biography. This would be the last album credited to Johnny Cougar, which was shortened to John Cougar for his self titled album in 1979. This would lead to Mellencamp's first top forty hit. Though he would go on to release Nothin' Matters And What If It Did in 1980, the singer's breakthrough wouldn't come until hit 1982 album American Fool. 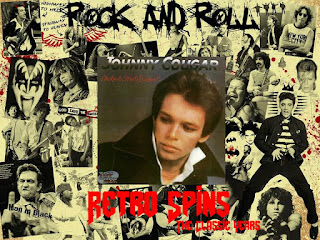 Today, I'm going back to 1976 to check out that debut record featuring Johnny Cougar singing about the Chestnut Street Incident. As I fired it up, I was greeted by a younger sounding musician, who despite this being his first record sounded powerful and passionate about what he was singing. While the majority of what played on were covers, it was when the title track of the album kicked in that I found myself saying, "Yes. This is John Mellencamp."

Chestnut Street, the song, feels very much like what drew fans to his music in the 80's. A well crafted story, from a personal perspective of Mellencamp. This is not only a great song, but the turning point in the album where I felt like it had any meaning to the singer. However, this got buried quickly under a pile of generic tracks written by Mellencamp, and more covers. This wasn't helped by a revisited rendition of Chestnut Street, aptly titled, Chestnut Street Revisited. It only stood to prove what I felt that this particular track was the best that was to be had on this album.

I won't go so far as to call the who experience, "bad". Truthfully, his cover versions of songs such as Oh, Pretty Woman, Jailhouse Rock, and Twentieth Century Fox aren't terrible. It's difficult to record a cover that is worth listening to over the original, and Mellencamp pulls this off. They're not superior versions, but they're okay.

Truth be told, I was a little surprised to read that his label dropped him after this album was released, because it actually got me interested in hearing more from him from this era. I therefore can't help but wonder if perhaps the failure of this album wasn't more so the result of a lack of good marketing, because the album itself is good.