Heart exploded big time in the 80's with their 1985 self titled album, which featured powerful hits such as; Never, What About Love and These Dreams. For me, the female led group came out of nowhere, but quickly became one of my favorites, thanks in part to continuous rotation on MTV.

However, little did my young mind know that Heart were no strangers to the world of rock 'n roll. Singer Ann and Nancy Wilson had been fronting the band for over a decade, lavishing as queens of rock with hits such as; Crazy On You, Magic Man, Barracuda, Straight On, and several more.

The group released their debut album, Dreamboat Annie, in 1975 in Canada under the label, Mushroom Records. Despite this limited release, the album would reach number twenty on the charts, going double platinum before it was released in the United States in 1976.

With major success under their belts from the starting gate, Heart began negotiations with their label to received a larger slice of the royalties, insisting that as a platinum band they should be compensated more. However, Mushroom insisted the group was a one hit wonder, and held firm. This lead to producer Mike Flicker leaving the label, which was the loophole Heart felt was in their benefit to also exit as well, as their contract specifically stated Flicker would produce their albums. Heart signed with Portrait.

Mushroom on the other hand felt the band was contractually obligated to provide them with two additional albums. When they band refused, the label took it upon themselves to release Magazine in 1977. As legal proceedings ensued, a settlement court ruled in Heart's favor to stop distribution on the album. However, with this, Heart was to provide the label with the promised second album per their contract. The group opted to return to the studio and complete Magazine, which was re-released in 1978.

Sadly, Vice President of Mushroom Records, Shelly Siegel died suddenly in January 1979 of a brain aneurysm. Without her, the label inevitably wen bankrupt, and closed down in 1980. This lead to Capitol Records purchasing the rights to Heart's first two albums, which they re-released in the early 80's.

Wow, that's a lot of good drama surrounding the band, but what about this purported double platinum album, Dreamboat Annie? Is it as juicy as the spectacle that was Heart versus Mushroom Records? Well, I suppose that depends on your personality. Do you like gossip or music better? 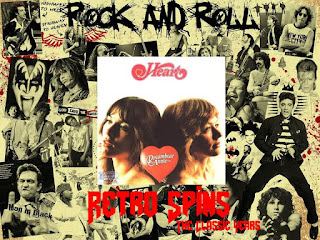 Dreamboat Annie jumps right into the highlights of the album with Magic Man, which sets the bar pretty high. For whatever reason, this is followed up by a very short rendering of Dreamboat Annie, the song. Just as you're getting into it, it ends, making you wonder why it was even included. Fortunately, you are quickly whisked off with Crazy On You, distracting you from the odd edited track.

There's a couple throw away songs after this, and finally you come to the full version of Dreamboat Annie, but then you're once again taken on a journey of throw away forgettable songs for the remainder of the album. This all wraps up with yet another rendition of Dreamboat Annie, this time a reprise version. Come on, Heart. The song is okay, but it's not that good that you needed to add it three times to the album.

Overall, their debut album is decent. I can understand how it would go double platinum, being led by Magic Man, Crazy On You, and Dreamboat Annie. These are good songs. However, for as good as those three tracks are, the remaining seven are equally as forgettable. Hearing this album doesn't make me necessarily want to listen to any other studio albums from Heart. Rather, it makes me more so inclined to grab a greatest hits and cut to the chase.