Oingo Boingo
Good For Your Soul
1983

Though I've had it for many years now, and have listened to it many times, Oingo Boing's 1983 album, "Good For Your Soul" was actually the last album from the band I got. The reason being, when I was looking for it, you know, back in the days of record stores (1990's), I couldn't find it. I quickly learned this was because the album was out of print. As such, it became the first CD I ever bought off of Amazon, and at $120.00, brand new / sealed, it was the most expensive album (at the time) I had ever bought.

Times have sadly changed since then, and this CD was reissued, making the price I paid for it somewhat disappointing. However, considering I would have had to wait about fifteen to twenty years for this, perhaps I'm not so heartbroken over this. 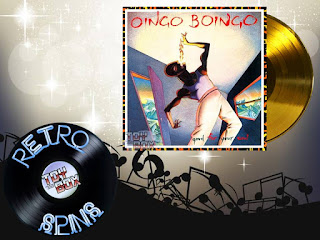 Good For Your Soul is the 3rd studio album from Oingo Boingo, and comes two years prior to the band really breaking with their most popular hit, "Weird Science", still on the horizon. However, with it also comes a group who have honed their style together, making it also a well polished release. It brings with it all the great multi-instrument variety and odd nature that was Oingo Boingo. It even features a bit of backtracking.

Because of how and when I was introduced to Oingo Boingo, I have to admit I don't honestly like the "original" cuts of many of their songs. Instead, I prefer the uptempo re-recorded / updated versions as heard on their Best O' Boingo and Alive albums. Still, I appreciate the originals for what they are, and have come to enjoy them more than I used to as the years have passed.

As such, when I listen to Boingo albums, what I enjoy the most is hearing those tracks you won't find on their greatest hits albums. Songs like, Cry of the Vatos, Fill the Void, Nothing Bad Ever Happens to Me and Little Guns, all of which are featured on Good For Your Soul.

These tracks, in addition to the "hits", make for a well rounded album, and honestly while it's not my all time favorite from them, it ranks pretty high up there. I suppose though I am a little biased when it comes to reviewing anything from them since they are essentially my second favorite band of all time (Queen being the first).

With that said, this wraps up Retro Spins for 2019.

Click "HERE" to go back to the home page. For more posts related to this one, please click the labels below.
Posted by The Toy Box on December 31, 2019
Email ThisBlogThis!Share to TwitterShare to FacebookShare to Pinterest
Labels: 1983, 80's Album Review, 80's Music, 80's Music Review, Good For Your Soul, Music of the 80's, Oingo Boing, Retro Spins