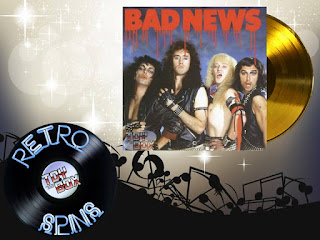 Some of you may recognize Adrian Edmondson, Nigel Planer and Rik Mayall as the cast of another British show, made popular in the early days of MTV. That show was, The Young Ones, which ran from 1982 to 1984.

I digress though. Let's focus on today's Retro Spin, the self titled, Bad News.

The stand out track, and what (somewhat) catapulted Bad News into public light, was their over the top, terribly performed (on purpose) cover of Queen's Bohemian Rhapsody. How exactly do you get the rights to destroy Queen's greatest hit of their entire career? Get Brian May, of Queen, to produce the album.

The 1987 version of the album featured six tracks, all of which were songs. However, if you picked up the 1989 re-issue, you not only got the six tracks, but also several behind the scenes sketches and a handful of the tracks from the Bad New 1988 album, Bootleg.

Depending on one's mood, this can be a very funny album, or quite annoying. I've honestly had listening sessions which have resulted in both. I'm either giggling like an eight year old, or groaning in dismay until I turn it off.

If I were to recommend this to anyone, it would be the 1989 re-issue, as not only will that give you the biggest bang for your buck, but also provide you with the sketches. If nothing else, I recommend having a viewing of the music video to Bohemian Rhapsody.


Click "HERE" to go back to the home page. For more posts related to this one, please click the labels below.
Posted by The Toy Box on December 10, 2019
Email ThisBlogThis!Share to TwitterShare to FacebookShare to Pinterest
Labels: 1987, 1989, 80's Album Review, 80's Music, 80's Music Review, Bad News, Music of the 80's, Queen, Retro Spins