Retro Spins: Chunky A - Large And In Charge

People were pretty gullible in the 80's. Take for example in 1989, when people actually thought Chunky A was a rapper, and not just Arsenio Hall making a comedy album. Through the magic of editing, Chunky even appeared on the late night host's show, as if to drill home the gag. 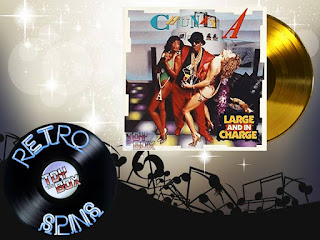 Rap was big time in the music scene with rappers such as Run DMC, Fat Boys, Beastie Boys, LL Cool J, Public Enemy and Tone Loc. While it wasn't necessarily my go to music of choice, and still isn't today, I found a few songs here and there that resonated with me. One of them was the leading single from Chunky A's "Large And In Charge" album, "Owww!"

While I'm sure this track helped to sell quite a few records and cassettes back in the day, it was by no means the only great song to come from it. In fact, overall, the album as a whole is pretty darn good. My personal favorite being "I Command You To Dance". Where else are you going to find lines such as, "Don't sit in the corner picking your nose, work them pumps, sweat them clothes"?

I hadn't heard this album in over two decades (almost three), and I have to admit, it's just as fun to listen to today as it was as a kid. It's got humor, which as a kid, was hysterical. However, as an adult, and humor aside, it also has songs that are simply just good. Sure, there were songs I preferred more than others, but overall, I didn't hear anything on the album that I didn't like. Even the "morals" song, "Dope the Big Lie" (featuring Ice T, Paula Abdul, KRS One, Wil Wheaton and Arseniol Hall - as himself ) isn't hard to like. It sends a positive message without shoving it down your throat.

Overall, it was great to see this album stand up to the test of time. It was great to hear it again, and now that it's in my collection, I look forward to hearing it a few more times.

Click "HERE" to go back to the home page. For more posts related to this one, please click the labels below.
Posted by The Toy Box on December 24, 2019
Email ThisBlogThis!Share to TwitterShare to FacebookShare to Pinterest
Labels: 1989, 80's Album Review, 80's Music, 80's Music Review, Arsenio Hall, Large And In Charge, Music of the 80's, Retro Spins