Want a puzzle? How about some transfer sets? Maybe you prefer hologram stickers? Or is your thing more so in line with dressing up? No matter your preference, Colorforms has you covered.

While today's topic is that of the many products the company released in their Michael Jackson series, this is far from the tip of the iceberg. Throw out an 80's property, and chances are high Colorforms produced some form or fashion of the aforementioned list for it. Let me name a few which come to mind; The A-Team, Masters of the Universe, Cabbage Patch Kids, Gremlins, video game properties such as Zaxxon and Donkey Kong, Knight Rider, Smurfs...Seriously, this list could keep going for quite a while. Collecting the Rub n' Play lineup in and of itself would be a tremendous achievement and a fantastic collection, if I do say so myself. Kind of makes me want to...

By 1984, Michael Jackson was one of, if not the hottest artist of his time. Thriller blew up the charts in 1982, and The Jacksons released their studio album Victory, while also embarking on a massive world tour. If you didn't know who Michael Jackson was, you seriously were living under a rock.

With every shirt vendor producing t-shirts, LJN covering the doll market, Topps handling trading cards and Pepsi using him to sell soda, the market was pretty much covered. Leave it to Colorforms to tap a whole new genre of materials via their fantastic lineup of puzzles, stickers, Rub n' Play and more. There was nothing you couldn't put Michael's face on that wouldn't sell like hotcakes, and Colorforms was happy to mop up what everyone else left on the table. 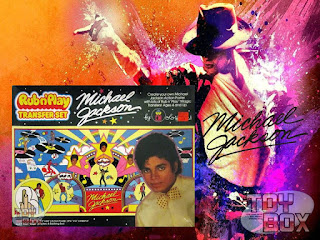 My personal favorite is hands down the Rub n' Play series. I've always been a fan of transfer sets, starting with my own introduction via the Star Wars branded Presto Magix versions. These were so much fun to do as a child. My mind would race with the story as it unfolded in my head across the kit. It was, and remains, such a shame that these things were one and done. It not only meant the fun was over, but also leads to quite a bit of difficulty in finding them on secondary markets. While I'd love to build a collection of these, it would in essence be for display only - Cause who would want to ruin the set? 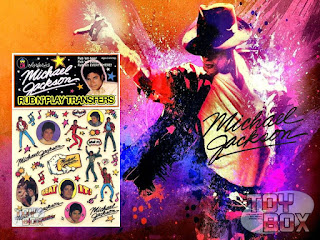 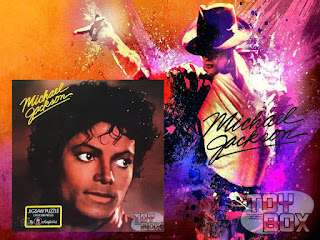 I remember my sister having these two particular puzzles. She built them both, glued them together, and hung them on her walls alongside the very many posters of Michael she had. To say she was a little obsessed back then would have been an understatement. 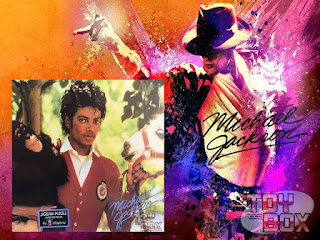 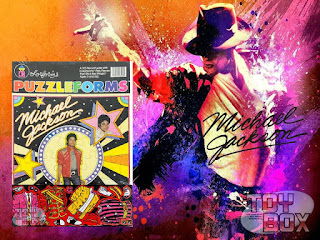 Puzzleforms were tiny puzzle sets with a twist. They came with adhesive vinyl stickers which could be added to the puzzle, removed and interchanged. This particular version featured an array of outfits which could be placed over Michael. 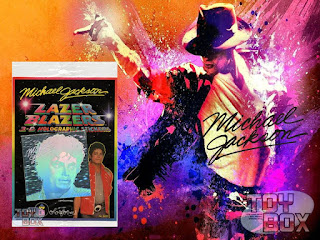 A Trapper Keeper's best friend in the 80's was stickers. Any stickers. Scratch and Sniff, puffy, or Colorform's Lazer Blazers. These awesome holographic stickers were perfect for fixing those split seams along the side of your folder. Plus, they just looked so cool with their reflective rainbow effect of colors. 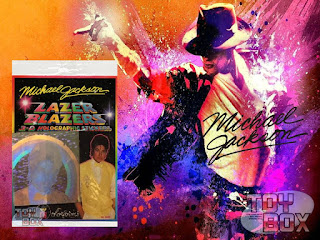 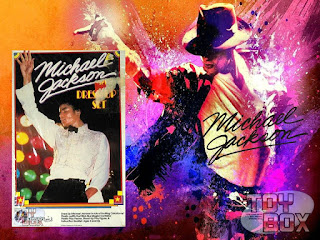 For those not simply content enough to play with Michael Jackson "toys", Colorforms allowed for you to take it to the next step with their standard and deluxe dress-up kits. Throw in the LJN microphone and glove, and watch out. People may just accidentally mistake you as the King of Pop. 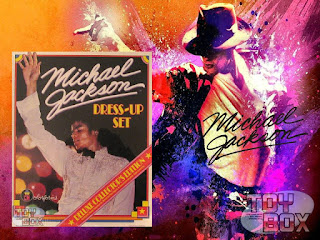 Colorforms may have been a simplistic brand, in terms of their overall merchandise, but they still are one of my greatest memories as a kid. They fed my creative side, while also delivering on the fun aspect. As I finish up this post, I'm seriously getting a bit of an itch to maybe track some Rub n' Play kits down. Heck, if they're cheap enough, I may very well buy a couple duplicates so I can play.