There's a bit of a history for this album with me. I added it to my want list quite a while ago, but never actually got around to bumping it up to the "priority" list. It was one of those, if I find it, I'll get it, CD's.

Fast forward to the Dave Hart Show from July of 2018. As I'm thumbing through CD Guy's (not his real name) massive selection of dollar CD's, I see the spine for this CD. Naturally, I nab it immediately, add it to my massive pile of discs I'm going to buy, and think nothing more of it until I get home. It's when I put it in my CD drive to rip it for iTunes that something goes awry. 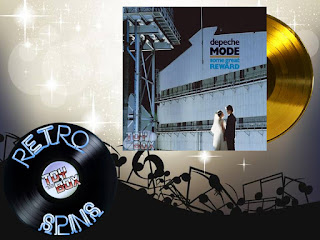 The tracks being ripped aren't recognizable from the back of the cover. As I investigate further, I find the reason for this is because it's not actually the album, Some Great Reward. Instead, it's Depeche Mode's 1990 album, Violator. It's still a decent CD because it has their hit, Personal Jesus on it, but it's not the album I was hoping to have.

It wouldn't be until Christmas of 2018 that I would actually finally say, "Enough is enough," and actively track this CD down on ebay. I didn't pay a dollar for it, but it was still relatively cheap.

So with all of this legwork, how was the CD? Well...

I think I'm going to have to listen to this one again. Reason being, I don't know what my final verdict on it is just yet. After having my very first spin of it, I didn't necessarily hear any thing I didn't like. In fact, I was actually quite intrigued by it. However, the only thing memorable from it is the track I bought the album for in the first place, People Are People.

Not much of a review, I know.

Click "HERE" to go back to the home page. For more posts related to this one, please click the labels below.
Posted by The Toy Box on December 17, 2019
Email ThisBlogThis!Share to TwitterShare to FacebookShare to Pinterest
Labels: 1984, 80's Album Review, 80's Music, 80's Music Review, Depeche Mode, Music of the 80's, Retro Spins, Some Great Reward