It's my first Halloween giving out candy in a good five to ten years. It wasn't from lack of trying, but rather apartment living which was thwarting my efforts. Kids just didn't seem interested in trick or treating around my neighborhood, let alone trekking up three flights of steps to do it. Now that I'm in a townhouse, it's back to it! 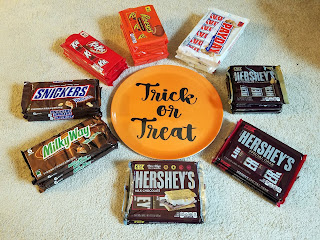 Candy is what Halloween is all about for the kids. Well, candy and costumes. Truth be told though, I think if kids could get away with just knocking on doors for candy without the costumes, they would. But, hey. If you want free candy, then amuse me in the process!

I have to be the cool house on the block, which means I have to be the guy giving out full size candy bars. I'm locked and loaded with an assortment of one hundred forty-four bars. With the average household having two children each, that gives me enough for seventy-two visits. As I do the math, I'm admittedly a little worried I may not have enough.

Considering I spent about $120.00 on candy, it's going to have to suffice. It will just have to last as long as it lasts, then the ol' porch light goes out. Regardless, I think I can check this one off the list as a success.

For this, I took the cheap route. I wasn't about to spend two to three hundred dollars on pumpkins which will get smashed on my stoop, or light / blow up yard props which will get used for one night, then stored away to collect dust only to be ignored the following year because it was such a pain to deal with the prior year.

Sidewalk chalk and a little imagination will suffice. If kids don't get the point from all of this, well, there's nothing I can do about that. I'll check this box as good enough. 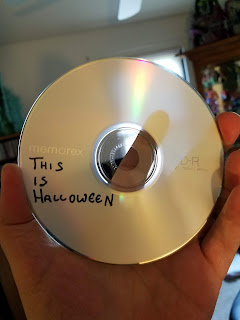 I spent a fair amount of time on this one. Initially, I was going to bring my record player downstairs and pipe out some fun Disney Halloween related records such as Trick or Treat and other Halloween Stories, The Legend of Sleepy Hollow and Rip Van Winkle, and last, The Nightmare Before Christmas (narrated by Christopher Lee). You know, the good stuff from my childhood and late teen years.

As I was putting this all together, it dawned on me these three records would only last about forty-five minutes. Far too short. I then thought, "Well, it's not like I couldn't just rotate them out and play them multiple times. A good idea, but I couldn't help but think it would drive my girlfriend nuts in the long run. Let's be honest. I'd be lucky if she didn't give me grief the first time around. So I switched gears, and decided to break the entertainment department up in two halves.

First, I made myself a CD to play which features a ton of great related and passable songs for Halloween. I was able to pack nineteen tracks onto this bad boy, which equates to seventy-seven minutes (and some odd seconds) of tunes.

Nice list, huh? I had a few other tracks originally planned for the CD, but time constraints ruined that. Those tracks would have been; Are You Ready For Freddie - The Fat Boys, Scary Monsters (and Super Creeps) - David Bowie, Season of the Witch - Devon, This Is Halloween - Cast of The Nightmare Before Christmas and Witch Doctor - Alvin and the Chipmunks.

For the second part of the act, I picked up a cheap (a dollar) DVD of The Simpsons: Treehouse of Horror. This particular disc has episodes V, VI, VII and VIII. At approximately ninety minutes, it will pretty much wrap up my Halloween. It is after all a work day tomorrow.

This is probably what took me the longest to come up with. I wanted to have fun with the eats, but at the same time, I couldn't exactly spend all my time in the kitchen. Plus, who would want to? Not to mention the mess. Additionally, I didn't want a bunch of "junk food". This proved to be quite difficult as most Halloween related food I was finding online was mainly sugar or hot dog based.

I finally settled on just making some pizzas. These would be quick, easy and could also be decorated in Halloween styles. I'm going to make a taco pizza with a green backdrop of guacamole, and a spider web using sour cream. I'll add a couple spiders in with some chopped up olives, and call it a day.

It's not the greatest of ideas for dinner, but it will do.


Click "HERE" to go back to the home page. For more posts related to this one, please click the labels below.
Posted by The Toy Box on October 31, 2018
Email ThisBlogThis!Share to TwitterShare to FacebookShare to Pinterest