Ever heard of Phil Collins? Yeah, of course you have. I'm just acting like a fool.

By the '80's, Phil Collins was established as the front man for the highly successful Genesis and working on not only a solo career, but also an acting venture. His face was everywhere. His music was everywhere and I guess you could even say he was a household name at this point.

No Jacket Required wasn't Collin's first solo outing, but I dare say it's his most successful. By February of 1985, the January released album was racing up the charts starting with the hit One More Night. The song went all the way to number one by March, passing by Collin's duet with Philip Bailey, Easy Lover, which had charted in January of '85.

As One More Night descended down the charts, Sussudio debuted at number thirty-nine (May). It too went all the way to number one by July. That same month, Don't Lose My Number made its chart appearance. While the song made it to the top ten, it couldn't go any further than the number four spot - Not that this is a terrible achievement of any sorts. 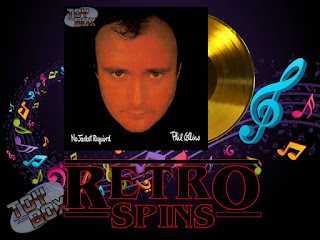 Though it wasn't on the album, Collins saw one more hit for the year with Separate Lives - A duet with Marilyn Martin from the soundtrack White Nights. The song went all the way to number one November.

1986 was just as kind to Collin's when his fourth track from the album debuted at number seventy-three in March. The song, Take Me Home. The song climbed to the number seven spot where it stayed for a couple weeks before dropping back down.

You can't deny No Jacket Require didn't come packed with fantastic hits. However, four songs an album is not. Nope. There's six more songs to be found here - Seven if you have the compact disc version. So how is the album as a whole?

It's good. Really good. Though they didn't get chart love, tracks such as Only You Know and I Know, I Don't Wanna Know, Who Said I would and Doesn't Anybody Stay Together Anymore all deliver in their own right. The rest...Eh...They're not terrible, but definitely not as (opinion) good.

I ended up with eight out of the eleven (CD version) songs from this album on my IPOD - Which to me makes this one a fantastic listen. I can't tell you how happy I am after the bevy of sub-par albums to have finally hit a high point again. Hopefully this keeps up.

In closing, don't forget to throw your name in for for a chance to win a Solo Blu-Ray / Digital Code combo by joining the contest "HERE".

Click "HERE" to go back to the home page. For more posts related to this one, please click the labels below.
Posted by The Toy Box on October 09, 2018
Email ThisBlogThis!Share to TwitterShare to FacebookShare to Pinterest
Labels: 1985, 80's Album Review, 80's Music, 80's Music Review, Music of the 80's, No Jacket Required, Phil Collins, Retro Spins