Milton Bradley doesn't often dabble in the realm of toys. They have their niche carved out in board games and they do it well. As such, they don't necessarily have to stray far from that beaten path. 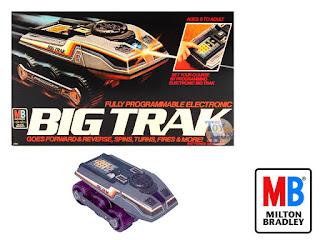 However, in 1979 they did and in a big way. The company gave the world Big Trak! The fully programmable electronic vehicle! This thing was hot, hot, hot when it first hit markets. Kids loved the concept of being able to essentially drive a remote control vehicle by way of inputting up to sixteen commands at one time on the keypad located at the top of the vehicle.

Even better, because the vehicle incorporated six wheels, it could go virtually anywhere. Simply put it down on the ground, input your choice commands, then watch it go! Keep in mind this was a big deal in the 70's. It was cutting edge technology at its finest and to make it even better it was a toy!

Though they are the exact same vehicle, there were technically two versions of the vehicle released. The black version (above) was released in the USA, while the white version (below) saw a release only in the UK. 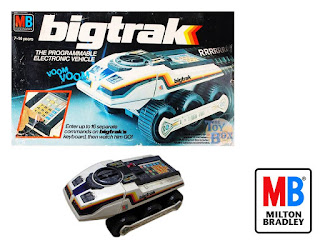 You may also notice another slight difference between the two vehicles. The USA version is entitled Big Trak, while the UK version is Bigtrak.

Milton Bradley also produced an add on transport which could be attached to the back of your Big Track. Now not only could you program your vehicle to go anywhere, but you could also fill up the back with a bunch of action figures to take them off on an adventure.

Much like the vehicle itself, the transport came in both white and black - to match with their respective region released vehicle. Again, note the names to distinguish between the USA and UK versions. 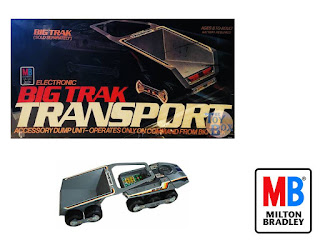 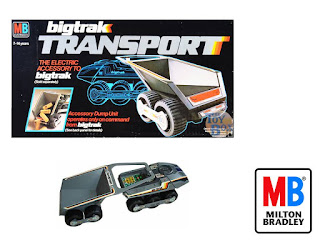 Big Trak remains to this day a very popular toy. These days it gets released periodically by company Zeon Limited who are the current rights holders. Unfortunately, these releases are limited to the UK with the most recent version being the 2016 Bigtrak XTR.

Click "HERE" to go back to the home page. For more posts related to this one, please click the labels below.
Posted by The Toy Box on October 22, 2018
Email ThisBlogThis!Share to TwitterShare to FacebookShare to Pinterest
Labels: 1970's, Big Trak, Milton Bradley