By the 1984, Sheena Easton had her fill of the "good girl" image she was associated with. Not sure how this could be a problem for people to be known as good, but hey, to each their own. Anyway, Easton was set in her mind that she wanted to show the word she was naughty and did so via her October 1984 album, A Private Heaven.

Easton certainly got her wish. With the aid of Alexander Nevermind, AKA Prince, her hit Sugar Walls not only made it to the top ten of American music charts, but also number two on Tipper Gore's Filthy Fifteen. Yes, good girl Sheena Easton helped pave the way for the Parents Music Resource Center (PMRC) to strictly enforce what music children could and couldn't listen to via little black and white "Parental Advisory" stickers. Thanks, Sheena!

Okay, fine. It is a pretty darn good song. I suppose it's also more so Prince who wrote the song - Who coincidentally wrote (and / or performed) two of the top four songs on Ms. Gore's list. So perhaps it's better stated as, "Thanks Prince!" No really, I mean that. Thanks! Your contribution to '80's music is fantastic!

But, back to Ms. Easton. Ms. Naughty Naughty if you will. 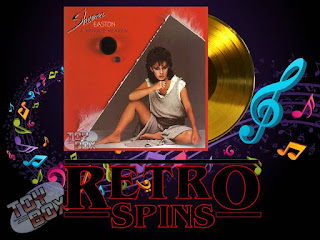 The first track to actually chart from A Private Heaven was the song Strut. The track debuted in August of 1984, a full two months prior to the album's release. It made its way to the number seven spot before descending back down where it was met by Sugar Walls in December.

As mentioned above, Sugar Walls also ran up the charts to the top ten, peaking at number nine where it stayed for two consecutive weeks before dropping down and eventually off the charts. The song Swear followed suite debuting in March but disappeared the following week.

During my play through of A Private Heaven I found a fairly solid album. Of course I love Sugar Walls and Strut - I mean, come on. How can you not? However, I also found three additional great tracks; Hungry Eyes, Swear and Hard to Say It's Over - Which is a ballad of all things. For those of you keeping up with Retro Spins, you know I don't often dig on ballads.

Though I wish the other five songs on the album would have delivered as well as the five aforementioned ones, I won't hate on the album. It's pretty well rounded and overall was a good listen.

On a side note - What happened with Sheena Easton albums? Have you seen the price of her CD's as of late? A Private Heaven and her prior album Best Kept Secrets have gotten rather costly! $20.00 and up for used copies. Dang!

Click "HERE" to go back to the home page. For more posts related to this one, please click the labels below.
Posted by The Toy Box on October 16, 2018
Email ThisBlogThis!Share to TwitterShare to FacebookShare to Pinterest
Labels: 1984, 80's Album Review, 80's Music, 80's Music Review, A Private Heaven, Music of the 80's, Retro Spins, Sheena Easton