Retro Spins: The Moody Blues - The Other Side Of Life

The Moody Blues
The Other Side of Life
1986

The Moody Blues have been releasing musing since 1965 when their debut album The Magnificent Moodies hit the groovy scene. However, by their 1972 album, Seventh Sojourn, the band was ready to call it quits and did so for a brief period. They returned in 1978 to the music scene when Decca approached them and encouraged a reunion album. Some would say this was actually where The Moody Blues truly began to shine as a band.

Enter the 80's. A period in time where artists from the 70's either powered through to a new generation of ears or withdrew to become classic rock icons - Not that those who hung around didn't earn this status as well.

The Moody Blues released The Other Side of Life in April of 1986 and found themselves climbing the charts with their hit In Your Wildest Dreams. From its debut on the charts in April it would climb its way all the way to the number nine spot by July where it would stay for two consecutive weeks before beginning its drift back down. 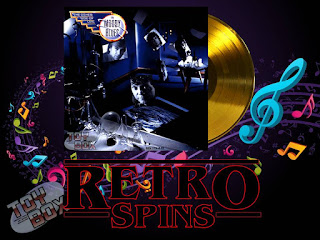 The album titled track, The Other Side of Life, would also hit the charts in August of that same year. However, it lasted only one week before disappearing.

The album was enjoyable to listen to. It definitely had a very sixties and 70's type tone to it with an 80's vibe of synthesizers. However, the unfortunate downside to this is that while the songs are decent to listen to, very few stand out as "must haves" for my IPOD. Truth be told after the past few albums I've posted about, I'm beginning to wonder if my tastes are too picky or simply set in their ways. I'm listening to all these albums and coming away with a very blah mentality on a lot of them. I'm not sure what it is.

I will say it was a fun surprise to hear Rock 'N' Roll Over You pipe through the speakers. I've been a fan of this song since owning The Karate Kid II soundtrack from 1986. While I knew it was The Moody Blues, I never knew it was on this particular album. I did end up grabbing the tune for my IPOD because the version I had was a vinyl rip due to the KKII soundtrack only being available on vinyl and cassette - I own it on vinyl. Additionally, I grabbed In Your Wildest Dreams for my shuffle pile.

For an album with nine tracks, it's really disappointing to only come away with two songs. I'm going to have to put some real thought into the next album I listen to as I really want something that is going to blow me away. Something around the '82 - '85 era perhaps.

Click "HERE" to go back to the home page. For more posts related to this one, please click the labels below.
Posted by The Toy Box on October 02, 2018
Email ThisBlogThis!Share to TwitterShare to FacebookShare to Pinterest
Labels: 1986, 80's Album Review, 80's Music, 80's Music Review, Music of the 80's, Retro Spins, The Moody Blues, The Other Side of Life