Roland Gift of The Fine Young Cannibals has a problem. His songs are either really good and his unique voice accompanies them very well or the songs are terrible and his voice grates on your nerves. Sadly, The Raw & The Uncooked, the bands second and last album from February 1989 has too many of the latter.

Many people will of course remember the band for their hits She Drives Me Crazy and Good Thing. Drives debuted on the charts back in January of '89 and helped put the band on the map when the song made its way to number one in May. Good Thing debuted this same month and it too went all the way to number one by June.

Don't Look Back would be the third single from the album to chart. Unfortunately, it would only climb to number eleven before dropping back off the charts. This was followed up by I'm Not the Man I Used to Be which debuted in November at eighty-five, but disappeared the following week.

With two number one hits, you would think people would be waiting on the edge of their seats for a follow up album. Instead, the band disbanded. Why? 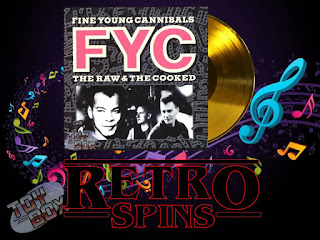 Roland Gift summed the reasoning up in an interview many years later stating there was so much pressure from the studio to sell more albums. He decided to take few years off when he became a dad and quite honestly that just turned into twenty years. Okay. I respect that. Make your money, make your family and find your priority. Can't hate that.

Now back to the album. I'm not going to deter from my original statement of how good songs sound really good and terrible ones are like torture. Okay, I maybe didn't put it exactly like that, but that's the truth of it.

As for the album on the whole, out of the ten tracks I put four on my IPOD - Two of which were Good Thing and She Drives Me Crazy. The other two; I'm Not Satisfied and Ever Fallen in Love. Beyond that, many of the songs fall under the annoying status - and one I even skipped. I don't remember what that track is called at this point, but the high pitched yodeling in which Gift tackled it was killing my ears.

Overall, I don't see what everyone else apparently did in the band. They're just okay. Let's be honest though - By 1988 the "good" music of the 80's was long since winding down. So, hey, Fine Young Cannibals you get the award of being the best of the mediocre years of the 80's. Good for you.

Click "HERE" to go back to the home page. For more posts related to this one, please click the labels below.
Posted by The Toy Box on October 30, 2018
Email ThisBlogThis!Share to TwitterShare to FacebookShare to Pinterest
Labels: 1989, 80's Album Review, 80's Music, 80's Music Review, Fine Young Cannibals, Music of the 80's, Retro Spins, The Raw & The Uncooked