Do any of you remember the short lived Saturday morning cartoon, The Wuzzles? For those of you who don't, it's no surprise. The series only lasted for thirteen episodes before being cancelled.

The characters were unique due to each one being a crossbreed mix and match of various animals. For example, Tycoon was half lion / half racoon, Brat was half wild boar / half dragon and so on and so on for the remaining characters.

Hasbro impacted toy isles very briefly in conjunction with the series when they released six figures based on the series. The line was more so geared towards younger kids, ages 2 and up, and us such did not include any accessories. 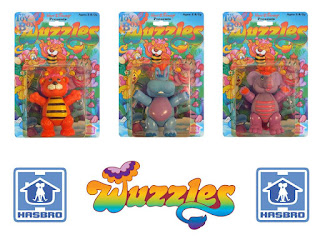 Despite the limited popularity of the figures, Hasbro found a bit more success with their plush and storybook lines (both not shown). 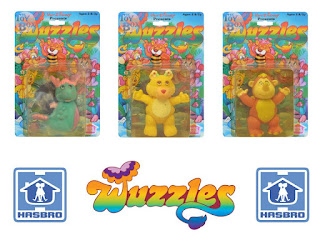 To get these figures mint on card these days, you're going to spend about $15.00 to $20.00 a piece. That's a fair chunk of change for...Well, toddler toys. They are at least all fairly readily available on secondary markets such as ebay.

Click "HERE" to go back to the home page. For more posts related to this one, please click the labels below.
Posted by The Toy Box on October 01, 2018
Email ThisBlogThis!Share to TwitterShare to FacebookShare to Pinterest
Labels: 1980's, Disney, Hasbro, The Wuzzles