Today we jump back to Remco to look at another super hero related line they produced.

The Powerized line is somewhat of a continuation of Remco's Energized line which we looked at a couple weeks back, and pretty much features the same figures from that line - With the exception of Captain America replacing The Green Goblin.

While some "figures" still incorporated the climbing feature which Remco used in its Energized line, the main schtick for the Powerized line was glow in the dark features as well as a "sliding cord for fast escapes". In other words, instead of vertical movement, the figures incorporated a horizontal one. The exception to this was Hulk. 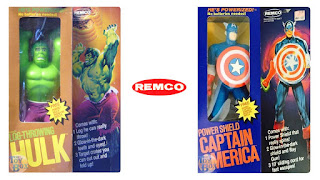 As we mentioned above, Hulk was an exception to the features for the figures. Instead of having a cord for fast movement, he included a throwing feature - Thus the name, Log-Throwing Hulk. Oddly enough, his arms didn't spring forward. Instead, you "locked" the log in a spring loaded peg hole located in his head. With the push of a button on his back the log would shoot off. The figure even included cardboard cut-out crates which you could use as targets. 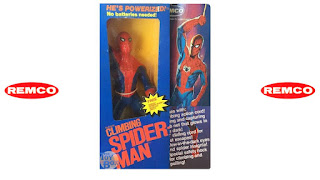 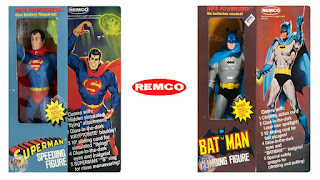 Remco didn't produce any vehicles for the series, so we thought we'd throw out an honorable mention to the Spider-Man CSF Copter which Remco released around this same time frame. Remco actually produced numerous CSF style copters in various licensed styles, and finding any of them can prove quite difficult. Though we aren't sure just how many different ones there are, we have seen Spider-Man (obviously), Hulk, Batman and even an Enterprise spaceship for Star Trek. 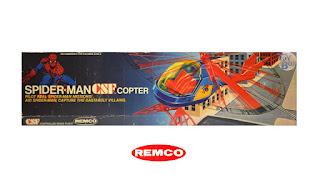 For those of you wondering, CSF stands for Controlled Space Flight. In other words, the copter was hooked to a long plastic line which sat atop a circular motorized pad. When activated, the copter would spin in a circle in a controlled space of flight. Learning stuff is fun!

Click "HERE" to go back to the home page. For more posts related to this one, please click the labels below.
Posted by The Toy Box on January 22, 2018
Email ThisBlogThis!Share to TwitterShare to FacebookShare to Pinterest
Labels: 1980's, Powerized, Remco