Help A Star Wars Fan Out

As you may know, I am a fan of collecting all version of Star Wars on home video. However, it has come to my attention that I have missed out on two versions of The Force Awakens I didn't know existed until just today. 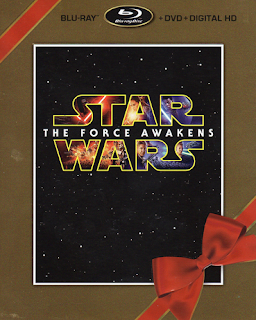 Around Christmas of 2016, Walmart released an exclusive Blu-Ray + DVD + HD Combo of The Force Awakens as well as a stand alone DVD version.

These came in gold slipcases which featured a red (printed on) ribbon on the top left and bottom right corners. The version shown is the Blu-Ray + DVD + Digital HD combo. The DVD version is similar in packaging, but says simply "DVD" at the top.

If you or someone you know has either (or both) of these versions and you (or they) are willing to part with them, I'm will to buy them off of you. Heck - Even if you just have the slipcases to sell that would suffice. I can rebuy the actual discs / cases.

Contact me by leaving a message in the comment section with your e-mail address (which will not be published). We can work out arrangements from there.

See the photo below for more images of the Blu-Ray version as well as the DVD version (tucked way behind the Blu-Rays). 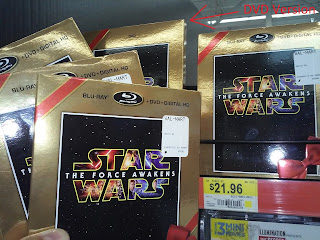 As mentioned above, these were Walmart exclusives. So if you don't have them, but find yourself out at a local Walmart and spot them, please keep me in mind.
Posted by The Toy Box on January 26, 2018
Email ThisBlogThis!Share to TwitterShare to FacebookShare to Pinterest