Looks like it is official ladies and gentlemen. Playmates Toys has removed all signs of Teenage Mutant Ninja Turtles from their site solidifying fan speculation the line has been cancelled.

Rumbles and rumors started in late 2016 when Playmates went on a heavy re-paint and re-release campaign, delivering pretty much every single figure released between 2012 and 2015 with a new paint scheme / name. This meant very few new figures actually made their way out to toy isles and when they did they were few and far between.

By mid 2017, it became very clear most retailers would not be restocking their shelves with new product as the TMNT section grew more barren with each passing day. It became even more obvious when what was put out would be nothing short of warehouse overstock of old cases - Some of which contained the second CGI film based line. This in turn started the ever inevitable rise in price on secondary markets of relatively new figures. 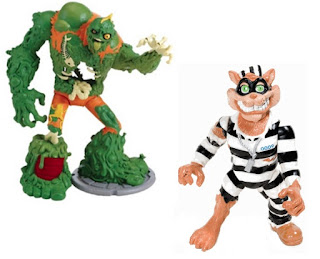 The perfect example of this being Muckman - A figure fans waited years to see released since its announcement in 2015 only to have it so short packed it has become the most rarest in the line to date. At $100.00 (or more) for a carded one, it looks like Muckman will become the Nickelodeon line's Scratch.

There are very few figures in my personal collection you would here me say, "I'm glad I spent $75.00 on the one I got." Muckman would sadly be that type of figure. I purchased him off of ebay after months and months of searching for him in stores and finally just giving up. Even then it took about a month to find the one I did end up with.

For those of you having trouble finding the last couple waves of TMNT figures - Including Muckman, head to your local (or not so local) Ollie's and / or Ross.  As of March 2018, they have been receiving some of the harder figures to find which were released towards the tail end of the series. My girlfriend found not only Muckman, but the blue outfit Usagi Yojimbo, the 1980's Beebop, Rocksteady and Leo and a couple Monster Hunters. Not only that, but they were only $5.99 to $6.99 each.

I know some of you have been looking for Muckman, so I had her grab that one for me. Reach out if you need him - And no, it's not going to cost you $100.00. Again though, there is only one.

I digress from the subject at hand though - The cancellation of the figure line in general.

As of this writing, several retail stores in my local area don't even have a Turtle section anymore in their toy isle. What little product which remains has been unceremoniously shifted off to clearance isles / bins.

However, at this point it's not really a big surprise. As I said above, many fans have speculated the end was near for some time now. Considering the animated series has also ended, it kind of makes sense to come to an end. Though I'd be lying if I said there weren't several more figures I wish we had gotten over the years. Despite how large it is, the line still feels very incomplete in terms of key characters which never saw the light of day in plastic form.

Nickelodeon already has a new 2D animation TMNT series in the works. As such it's a safe bet a new toy line is inevitable in the near future. The question yet to be answered is what will the characters look like? Will they be the same design as the 3D series - Which would allow the new toy line to transition seamlessly. Or will they be all new designs? My personal speculation - Prepare for something all new.

At this point in my life though - I really have no plans to start yet another collection of TMNT related figures. Been there / done that so many times already. I really have no desire to collect an abundance more of Leonard, Donatello, Michelangelo or Raphael figures. I have so many iterations already that I just don't need or want anymore.

Click "HERE" to go back to the home page. For more posts related to this one, please click the labels below.
Posted by The Toy Box on January 28, 2018
Email ThisBlogThis!Share to TwitterShare to FacebookShare to Pinterest