Sorry for the delay in posting about Christmas. I was away on vacation.

When I think back to Christmas of 2016, I ask myself, "Just how could Santa possibly top... 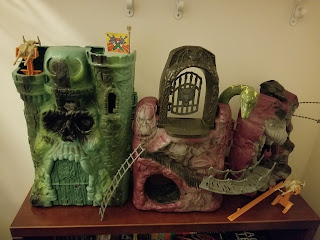 Vintage and complete Castle Grayskull AND Snake Mountain both under the Christmas tree? I mean, come on, does it get any better? Not to mention it was the year I *finished my Masters of the Universe figure collection.

*Finished as in purchased all the figures I want from the series, and not a full run.

Fast forward to Christmas 2017. Santa has a way of knowing what you want...When you constantly complain you can't find it. More importantly, Santa always delivers. That's why when I opened this particular package under the tree and found... 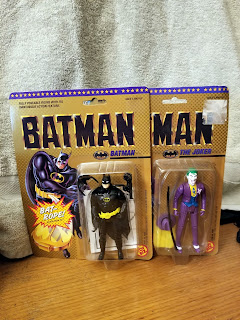 ...I was grinning from ear to ear.

A 1989 Batman movie Joker and Batman! Not only that, but Joker is the curl variant version! Anyone who has been reading my posts regarding the toy shows around the area I've been hitting knows how I've been disappointed in my hunt each and every time for these two figures.

It didn't stop there though. In it's own package under the tree was... 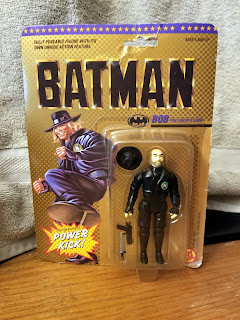 Bob the Goon - The third and final figure released in the Batman movie line before the series switched to  DC Comic Super Heroes, and focused on comic book iterations of various DC characters in an effort to flesh the series out. Mind you, I wouldn't have hated if the movie line continued with the likes of Bruce Wayne, Vickie Vale, Alexander Knox, Commissioner Gordon and so on. Sure, I get it - Those characters aren't exactly exciting to most people.

After opening those three figures I was ready to go play, but Santa said, "Wait a minute. You'll need these..." 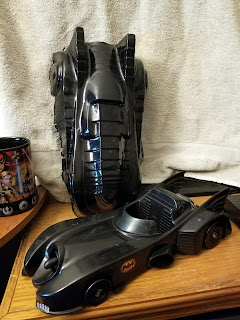 Whoa! Batmobile AND Batwing? Yes, please! These three figures and two vehicles are exactly what I got in Christmas of 1989, and I was so ecstatic to once again have them.

I love the cocoon shield which comes with this thing. The car also has the two yellow missiles inside their launchers, and best of all they still fire. 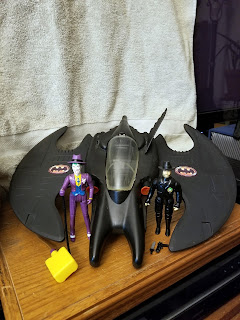 Unfortunately, Santa missed the teeny tiny detail of the one fin missing on top of the vehicle. However, a quick skip to ebay, and I found a really cheap one with several missing parts which had what I needed to complete mine.

About a week later, it took a few turns of the screwdriver, a switch out of parts and I was good to go. 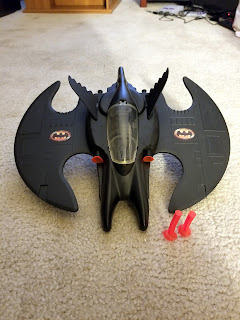 Fun note - When I unscrewed and opened up the one Santa gave me I was treated to a wonderful surprise. Inside the vehicle were two more suction cup darts. This set me once again to ebay to find two more darts because with six of them mine would be 100% complete. I found these for as little as $4.00! Now I'm just playing the waiting game until they arrive. Awesome find! I also have to add that the darts fire and the cruncher functions perfectly - And yes, that is a Super Nintendo Mini which I got in September 2017 hanging around in the background. The NES Mini is also back there somewhere off camera. 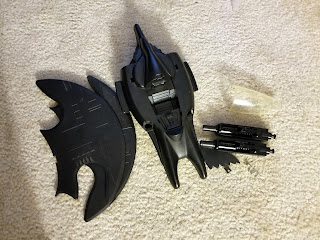 If someone wants a decent Batwing, and doesn't care about the missing fins, darts and cruncher mechanism, I will happily put this one back together and send it to you at no charge. Otherwise I will honestly just throw it away. It's really not in bad shape - It's just incomplete.

The extra Batwing has been claimed by fellow blogger Alexis. Check out Alexis' Treasures if you haven't already. You can also check out Alexis' reassembled Batwing "HERE".

All of the above made me ecstatic on Christmas, and would you believe this was just the tip of the iceberg? Yeah, for real. Santa gave me more than just the above. 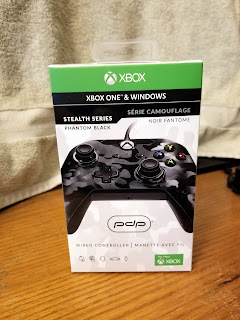 I can't tell you how many battery packs, charging wires and batteries in general I've gone through on my Xbox One (not to mention headsets). These accessories simply stop working (for me) after a month or two. Between switching back and forth between buying thirty dollar charging packs, five dollar replacement wires and more AA batteries than one person should need in a lifetime I was literally going broke just trying to play games.

Now that I finally have a wired Xbox One controller, I don't have to worry about any of the above anymore. 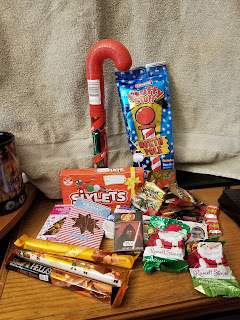 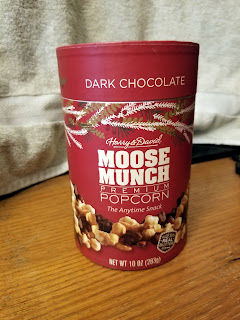 Santa also ensured I had a fair amount of snacks to get me through those long gaming sessions. I love popcorn and even more so when it's flavored with chocolate, caramel or both. Mmm...Moose Munch. 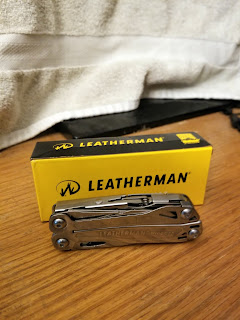 Okay, I'm grateful for this one, but I'm not an outdoors man nor a handyman. Something like this Leatherman Wingman really won't serve much of a purpose to me - Because I honestly don't know what I'm supposed to do with it. Who knows, maybe something will happen and it will come in handy. 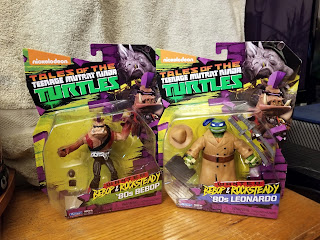 I still love collecting the Turtle figures from the new Nickelodeon line, but truth be told I've kind of given up on actively searching for them. There are just so many other toys I'm on the hunt for right now that these have to take a back seat. Fortunately Santa keeps a running list of the ones that come out, and grabs a few here and there. This year I got to add 80's Bebop and Leonardo to my collection. 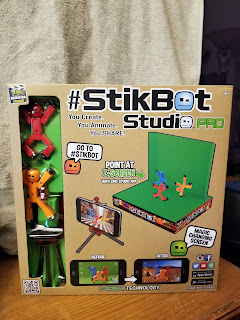 Before you judge - I passed by StikBot one day at a local Target and happened to say out loud, "This would be really helpful for taking photos of loose figures. Little did I know when I then proceeded on my way that Santa marked it on the list.

I immediately set to testing this out on my new Batman figures above and was really disappointed to find it simply doesn't work. Yes, you can remove the background (green or blue) and replace it with an image. Unfortunately, that's about all the use you'll get from it. Every photo I took was so pixelated and blurry that they were simply unusable. Santa boxed this one back up and said it was going back to the store.

This thing would have been awesome if it worked. Sadly, it just didn't. 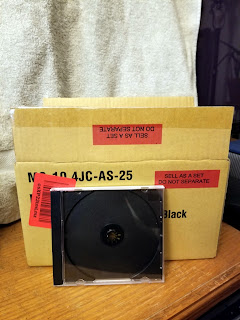 Santa also gave me an entire case of replacement jewel cases which will help put a dent in the CD cases I have which need to be replaced. As many of you know, I buy a lot of CD's for a buck a piece. With that very reasonable price sometimes comes the acceptance that the case isn't going to be pristine. These will definitely come in handy. 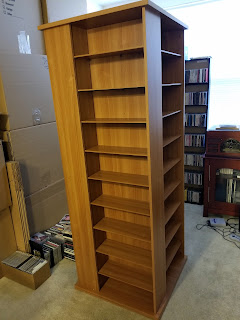 Nope, no actual CD's for Christmas. Rather, something much more needed. A CD tower which will actually hold the 1,200 CD's I have - Which you can see in the photo are hanging out on the ground due to the rack in the background being filled to the rim. 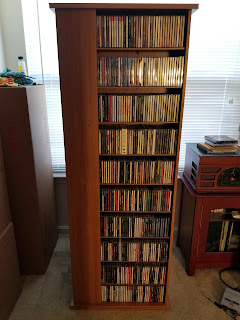 So beautiful! So clean! So organized! Love it! 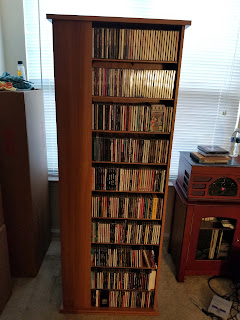 I filled up just about three sides of this bad boy. My girlfriend is going to use the old CD rack to display her autographed Walking Dead Pops which is a whole other post unto itself. She had a fair amount of these before, and I used Christmas as an opportunity to finish her set. I'm really eager to show these to you all because they're just so cool with their autographs and JSA cards. Definitely coming soon. 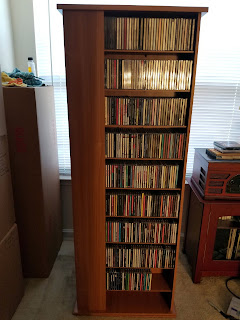 I also got some great stuff from friends and family.

Question: What do you get the guy who loves buying toys and CD's, but buys so many you can't keep up with what he wants from day to day? 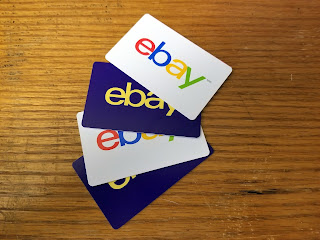 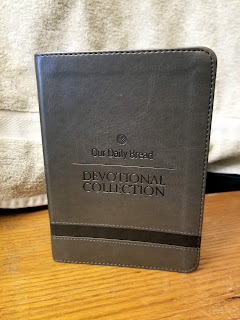 My mom got me a fantastic book of Daily Bread devotionals. Each page is essentially to be read and studied with your bible on a daily basis throughout the entire year. I'm really looking forward to reading through this. 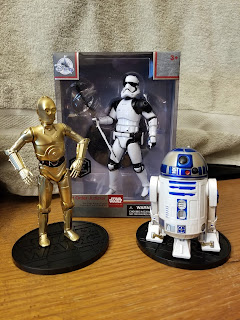 In addition to one of the ebay cards my brother also got me these really awesome die cast Star Wars figures. I've honestly never seen these before - Most likely because they are exclusive to the Disney Store (which we don't have near us). I really love the C-3PO and R2-D2 ones - And boy are they heavy.

I came to find there are several more characters in this series and I may have to track a few of them down.

My brother also sent some candy and Hickory Farms meat / cheese logs, but I didn't snap a photo of those.

Well, there you have it. My 2017 Christmas haul. It was a very generous year from Santa as well as friends and family and I appreciate it all!

When I came back to work on the 2nd, my assistant surprised me with a really cool belated Christmas gift. Check it out! 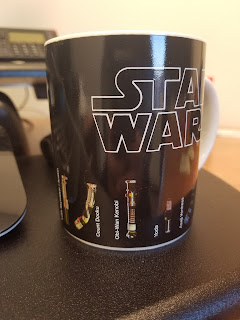 That's hotness right there! It wraps all the way around to the other side of the handle showing the various lightsabers for the Jedi and Sith. It's really cool!

The lightsabers extend when hot liquid is introduced! 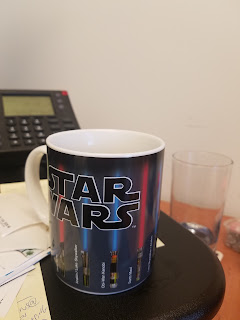 It was awesome before, now it's Supercalifragilisticexpialidocious!

Click "HERE" to go back to the home page. For more posts related to this one, please click the labels below.
Posted by The Toy Box on January 02, 2018
Email ThisBlogThis!Share to TwitterShare to FacebookShare to Pinterest
Labels: Christmas