There have been a ton of toys produced based on Marvel and DC Comic heroes. It seems like just about every toy company out there has produced some form of plastic item showcasing any one of the number of iconic characters from comic pages. As such, it's not surprise Remco got their chance in 1978 with their Energized line.

The concept for the figures was pretty simplistic with each of them featuring some form of motorized aspect in conjunction with a "string". For Spider-Man, Green Goblin and Batman this feature was designed to showcase the character climbing. Superman's feature was flying, and Hulks feature was pulling a stone wall down. Like we said, simplistic - But it works well for what it is. These are by no means bad figures. 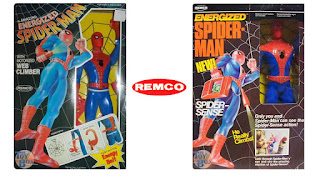 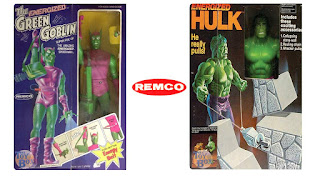 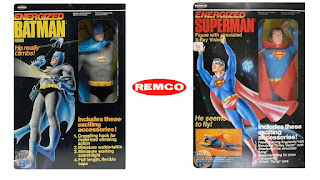 If you couldn't tell by how Spider-Man got two figures (as well as a villain), and everyone else got one, Spider-Man was definitely the focal point of the line. This concept was hammered home by the only vehicles and accessories released for the line being all Spider-Man based. 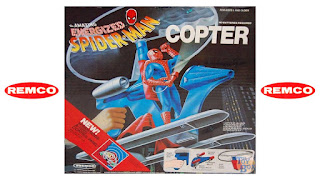 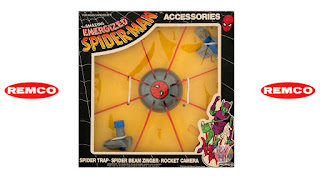 In addition to the above, we've seen catalog photos of an Energized Spider-Man Command Center. However, we have never actually seen the physical toy. It's possible this item was never released.

Click "HERE" to go back to the home page. For more posts related to this one, please click the labels below.
Posted by The Toy Box on January 08, 2018
Email ThisBlogThis!Share to TwitterShare to FacebookShare to Pinterest
Labels: 1970's, Batman, Energized, Green Goblin, Hulk, Remco, Spider-Man, Superman