Ah, who doesn't love a good board game? Set up for twenty minutes, play for five, repack for another ten minutes, and repeat. So time consuming.

Okay, so we're not really big board game fans here at The Toy Box, but we do have to admit there is some charm to be found in the display factor of the games - Especially a lot of the ones from the 70's and 80's. Board games are like books. All they have is the cover and back blurb to hook you. As for what's between both covers, only dropping your cash will truly answer that question.

We all know the story about how Kenner really didn't have a lot of product ready for Christmas in 1978. We all know they sold an Early Bird kit of figures - AKA an empty box - Just to start selling something. However, action figures were only the tip of the iceberg for the company. They released numerous toys for the brand - Some of which included board games.

Today we'll look at several (if not all) of the Star Wars branded games released throughout the Trilogy.

Kenner produced three games for Star Wars, each with its own theme, but yet same outcome where the player was required to eventually destroy the Death Star. 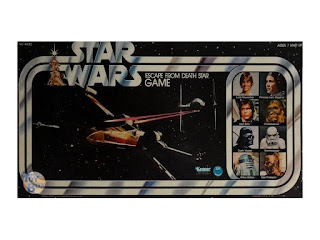 Luke Skywalker, Princess Leia, Han Solo and Chewbacca are trapped in the Death Star Trash Compactor. It's your challenge to help them escape to the freedom of the Rebel Base.

R2-D2 spins out your moves, but you must decide what passage ways to follow. The safe way in the long way, and time is running out. You must turn off the tractor beam and pick up a pair of secret plans. Will you take short cuts that risk encounters with the Force? You will if you're daring, and could be the first to board the Millennium Falcon, fight your way through TIE Fighters, and reach the rebel base to win! 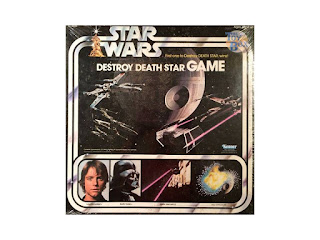 You command a squadron of three X-Wing fighters and try to drop your proton torpedoes down the exhaust shaft of the Death Star before it can destroy Yavin IV! The spinner dictates movements and determines the results of the battles.

Watch out for Darth Vader! He can pop up to cause trouble, but don't worry. The Millennium Falcon is coming to the rescue! 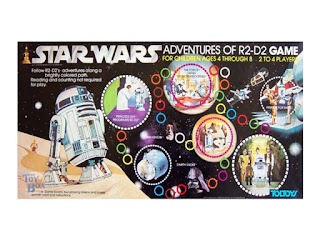 Experience the adventures of R2-D2, the true hero of the Rebellion!

The first one to return to the Rebel Base on Yavin IV after destroying the Death Star wins!


THE EMPIRE STRIKES BACK

Kenner jumped straight into The Empire Strikes back with two new games, which oddly enough played in a very similar manner. 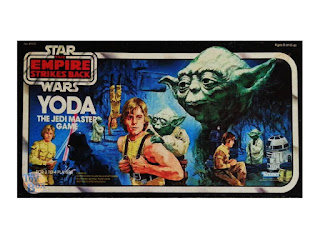 Be the first player to become a Jedi Knight, defeat the Dark Side of the Force and win!

Travel to the Dagobah System where Yoda, the ancient Jedi Master, will teach you the ways of the Force. Acquire Jedi merit as you successfully accomplish the difficult tasks and trials Yoda sets for your training.

Once you've obtained sufficient merit as a Jedi, enter the Jedi Knight circle and out-spin the Dark Side of the Force to win! 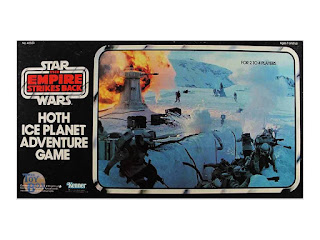 Be the first player to acquire sufficient Force to battle and defeat Darth Vader!

Spin to pilot your Millennium Falcon around Hoth. There are incidents along the way, and battles for Force Cards with Imperial villains.

Plan your strategy in wagering Force cards and spinner against Boba Fett, Stormtroopers, Probots and AT-AT's. Once you have enough Force, you can enter the center of the board and challenge Darth Vader! The first player to master the Force and successfully out-spin Darth Vader wins!

RETURN OF THE JEDI

When Return of the Jedi rolled around the board games shifted from Kenner's hands to Parker Brothers. The company produced two games in correlation with the film. 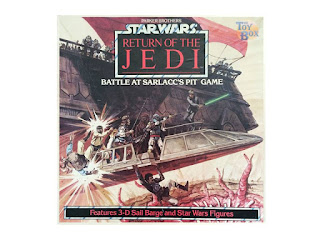 Luke Skwaylker, Princess Leia Organan, Han Solo and Chewbacca are being held captive by the evil Jabba the Hutt! They're on his Sail Barge, high above the dangerous sandpit where the monster Sarlacc lives.

To escape, you must defeat the Gamorrean Guards and the Powerful Nikto and Boba Fett by pushing them overboard into Sarlacc's waiting jaws. Collect Jedi points for each guard you defeat. Then try to overpower Jabba the Hutt.

The one with the most Jedi points at the end of the game is the winner! 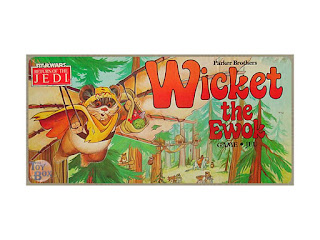 In this enchanting game, you can join the tiny Wicket the Ewok as he looks for his favorite food. Romp through the forest of Endor with Wicket and his friends Kneesaa, Paploo and Latara as they collect berries, nuts, pears, mushrooms and wild honey too!

You'll travel on shaggy ponies and in rickety wagons. You'll even swing on hang-gliders. All this adventure is yours as you try to be the first Ewok home with all finve kinds of food!

The end of the Trilogy didn't mark the end of Star Wars board games. With the resurgence of Star Wars in the late 1990's (though we personally didn't know it ever went away), so too came a big influence of new toys and merchandise.

The honorable mentions below are far from everything which was released, but rather just a couple of our personal favorites. 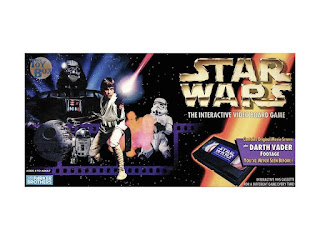 THE INTERACTIVE VIDEO BOARD GAME

Though most kids these days would look at their parents oddly if they whipped out a board game which also encompassed the now defunct VHS cassette, in the 90's this was the ultimate advancement in board game technology. A traditional cardboard game with a high tech video to accompany it. The Star Wars Interactive Video Game was certainly not the last to utilize this style of play. It was however one of the very last (VHS wise anyway).

The biggest charm to this game wasn't actually the game itself, but rather the VHS cassette which featured not only original footage from the first film, but also scenes which had been cut from the film. The cassette alone is worth getting if you're a collector of Star Wars home video. 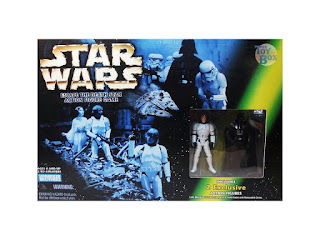 Star Wars action figures were everywhere in the late 1990's, and big money for Kenner once again. Parker Brothers and Kenner teamed up to develop an all new Escape the Death Star game, this time incorporating two exclusive action figures as opposed to traditional game pieces.

For action figure collectors this was a must have at the time, and no, not for the game itself. The figures also came with several accessories such as blasters and lightsabers.

This wouldn't be the only game released during this time to incorporate actual action figures.

Star Wars games are still readily in production these days. However, most of them are iterations of already well established games such as Risk, Monopoly, chess and more. It's sad in a way that many board company developers don't put much thought into originality these days, but we suppose the general idea is to have low development costs with high retail prices. No easier way to do this than just repaint a game which already exists.

Click "HERE" to go back to the home page. For more posts related to this one, please click the labels below.
Posted by The Toy Box on June 04, 2018
Email ThisBlogThis!Share to TwitterShare to FacebookShare to Pinterest
Labels: 1970's, 1980's, 1990's, Board Games, Kenner, Parker Brothers, Star Wars, Toltoys