Mr. Mister failed to draw much attention in 1984 when they released their first album, I Wear the Face. However, their follow up Welcome to the Real World released in November of 1985 changed all of that. 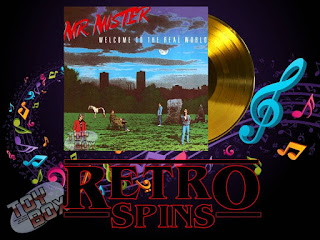 The two songs remained on the charts into 1986 where in January they passed each other as Kyrie continued its way up and Broken Wings was on its way out. Kyrie became Mr. Misters second number one hit by March of 1986 while Broken Wings fell off the charts.

Kyrie would be joined on the charts by the third single from the album Is It Love in March of '86 and much like Broken Wings and Kyrie, the two passed each other heading in opposite directions by April (Kyrie heading off the charts with Is It Love heading up them). Unfortunately for Is It Love, it would only reach the number eight spot before beginning its decent down the charts where it would disappear completely by June.

As a whole album, Welcome to the Real World is pretty good. In fact, I added a total of five (out of the ten) songs from it to my IPOD. Yes, Kyrie and Broken Wings are obviously two that made their way to it as were Is It Love, Black / White and Uniform of Youth.

Definitely a good treat for the ears.

Click "HERE" to go back to the home page. For more posts related to this one, please click the labels below.
Posted by The Toy Box on June 12, 2018
Email ThisBlogThis!Share to TwitterShare to FacebookShare to Pinterest
Labels: 1985, 80's Album Review, 80's Music, 80's Music Review, Mr. Mister, Music of the 80's, Retro Spins, Welcome to the Real World