TikiMon! Yet another oddball entry from Mezco during its heydays of the new Millennium. There is honestly little to say about this line as even packaging really gives no insight as to what the overall premise is. "Full of fun and Polynesian Pop!" is really all you'll find on the back regarding the series.

The back of the package also showcases all the figures from series one (AKA the only series), but even then beyond telling you the character's names and what accessories each one comes with there is no concepts shared behind the line. 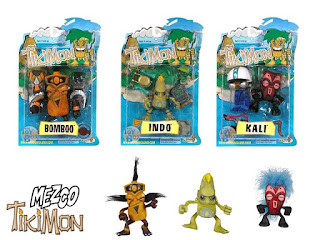 
For further information we actually had to seek out other websites in an effort to uncover the mystery. What we found was Toynk.com who seem to still have an abundance of stock on hand. On their site, they note the following about the line;

"Where is TikiMon Island? Basically in the middle of nowhere. Until now no human has ever seen a TikiMon which is good because they're usually getting into trouble."

Still not very insightful, but we're further then we were. 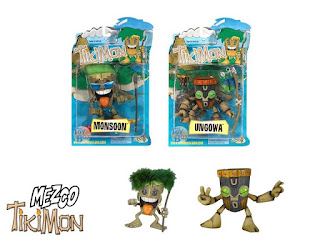 
Each figure stands approximately six inches high and comes packed in with its own unique accessories such as surfboards, shields and even parachutes. Each figure also features six points of articulation.

Prior to the line dissipating into thin air, Mezco produced two San Diego Comic Con exclusives. Unfortunately, since the figures were packaged in a blue non-see through package collectors were essentially blind bag buying and hoping for the best. 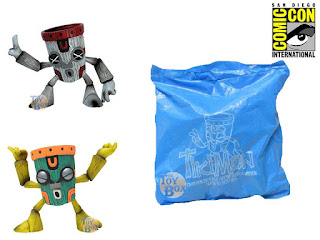 The line is definitely unique and has a cool factor to it. Unfortunately, it's the lack of any real premise behind it which gives it the "meh" factor. The world of toys isn't just about sculpting something that looks cool. It's about creating characters people want to learn about and collect as a result of that expanded interest from knowing about them. When you just throw a line out on the market and give it little to no thought, you end up with little to no reception.

Think of how much cooler these guys would be with an animated series behind them?

Click "HERE" to go back to the home page. For more posts related to this one, please click the labels below.
Posted by The Toy Box on June 11, 2018
Email ThisBlogThis!Share to TwitterShare to FacebookShare to Pinterest
Labels: 2000's, Mezco, TikiMon