Retro Spins: Steve Winwood - Back In The High Life

Steve Winwood
Back in the High Life
1986

Steve Winwood was no stranger to the music scene having been a part of major acts such as Traffic, Eric Clapton and more before as early as 1967. In 1977 Winwood released his first (self titled) debut. Unfortunately his career, while moderately successful, sputtered along for his first three albums.

After a four year hiatus, in June of 1986 Winwood released what would become his most popular album to date - Back in the High Life. The hit Higher Love charted the same month the album was released and worked its way all the way up to the number one spot by August of that same year. Though it started dropping down the charts immediately thereafter, it was joined in September of that same year by Freedom Spills, the second single from the album. Freedom would make it to the number twenty spot before beginning its decent back off the charts. 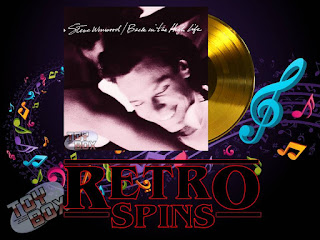 However, in February of the following year, another song from the album hit the charts - Finer Things. Though it made its way to the top ten by April of 1987, the song never reached number one and by May began its decent off the charts. This wouldn't be the last hit for Winwood from the album. Also in May of '87, the album title song, Back in the High Life stepped onto the charts making it all the way to number thirteen before slowly dropping off.

This heightened popularity for Winwood helped out his prior albums too as in October of 1987 the song Valerie (from his 1982 album Talking Back to the Night) debuted on the charts at number seventy-seven. It climbed all the way to number nine until it began fall from the charts through early 1988. It would be joined by the title track of the album, Talking Back to the Night and then by a song from Winwood's follow up album, Roll with It.

With so many hits from the album and a resurgence of interest in his prior work you would think the record as a whole would be amazing. Sadly, this isn't the case. The tempo stays relatively the same and the hits are really the only tracks to stand out. In fact, as I was listening to one of the songs - which at this point I don't even remember the title of - I found myself saying, "This is the kind of music I would expect to hear in a movie about a bar or while physically sitting at a bar." I probably can't explain what that means, but feel you would know what I mean if you experienced the album for yourself.

I'm actually kind of sad to say that no new tunes made it to my IPOD to join the songs which were already there; Higher Love, Back in the High Life and The Finer Things.

Click "HERE" to go back to the home page. For more posts related to this one, please click the labels below.
Posted by The Toy Box on June 19, 2018
Email ThisBlogThis!Share to TwitterShare to FacebookShare to Pinterest
Labels: 1986, 80's Album Review, 80's Music, 80's Music Review, Back in the High Life, Music of the 80's, Retro Spins, Steve Winwood