There's a joke I've come up with that I like to tell when referring to the band Heart. I say, I bet Heart's career went something like this. Ann was packed up and ready to leave home. She told her mother, "Goodbye mom. I'm off to be a rock star." To which her mom would respond with the typical answer, "Take your sister with you." Older siblings will know what I mean having heard this from their parents when attempting to tromp off to play. I know, kind of lame.

Many fans of the group feel like the band sold out in the 1980's. Specifically with their self titled album from July of 1985. Okay, I respect that opinion. It's rough when you love a band, their music, their style and suddenly they do a 180 departure from it and go in a different direction. However, there's no denying that the band's work in the '80's yielded them the most commercial success. So perhaps while a transitioning from a hard rock edge to the more commercial mainstream pop sound wasn't some people's favorite, it was clearly a smart move for the band.

What About Love jumped onto the charts a month prior to the album's release and climbed to the top ten by August. As it began its decent back down the charts, it was joined (in September) by Never which made its way to number four by December before dropping back down. 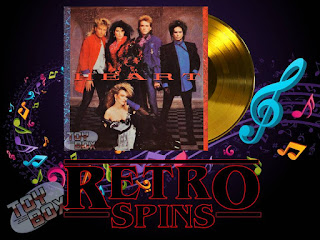 The last track from the album to chart was If Looks Could Kill. However, this would debut at number eighty-six in July and fall completely off the charts right after.

Overall, I really liked this album. Six of the nine tracks have a regular rotation in my IPOD; If Looks Could Kill, What About Love, Never, These Dreams, Nothin' At All and the newly added as of the Retro Spin play, All Eyes. The remaining three songs aren't terrible and flow nicely with the album as a whole. They just don't necessarily stand out as anything beyond being just okay.

Click "HERE" to go back to the home page. For more posts related to this one, please click the labels below.
Posted by The Toy Box on June 28, 2018
Email ThisBlogThis!Share to TwitterShare to FacebookShare to Pinterest
Labels: 1985, 80's Album Review, 80's Music, 80's Music Review, Heart, Music of the 80's, Retro Spins