Rap music and me are like grease and water. They just don't go together. I'm not big on heavy bass driven beats nor songs with a bunch of cursing and nonsensical lyrics behind it. So for me, it was odd I found myself listening to Run DMC's May 1986 album, Raising Hell. I had bought the album for one song - Walk This Way with Aerosmith and quite honestly I had no intentions of listening to anything other than that. 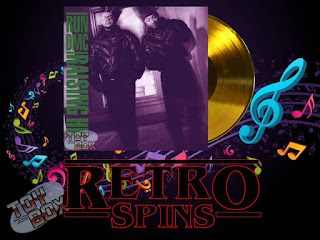 Well, let me tell you, I'm glad I did. Mind you, I'm no better enlightened in the world for having done so, nor will I be rushing out to buy up a bunch of 80's rap music albums. However, I can say there were some songs on there which stood out for me. I can also say as a whole the album flows rather nicely from track to track to keep you mentally invested.

It is unfortunately for the fact that the album flows so well that I honestly didn't pick up on too many tracks which stood out as singles which I wanted to add to my IPOD. I of course already had Walk This Way added to my shuffle list and added It's Tricky, Raising Hell and You Be Illin'.

The fact that I enjoyed the album did intrigue me enough to look up some 80's rap artists and along with that I found an interesting read on the Golden Age of Hip Hop on Wikipedia. Again, I'm not going to rush out and grab a bunch of rap albums, but I can say with all honesty I was entertained listening to this album. I can also appreciate how it helped to pave the way for rap music as a genre.

Click "HERE" to go back to the home page. For more posts related to this one, please click the labels below.
Posted by The Toy Box on June 05, 2018
Email ThisBlogThis!Share to TwitterShare to FacebookShare to Pinterest
Labels: 1986, 80's Album Review, 80's Music, 80's Music Review, Music of the 80's, Raising Hell, Retro Spins, Run DMC