Disney has always had a problem when it comes to producing blockbuster films. It seems they often think having big name actors attached is enough to turn a lifeless script into a hit. Sure, it may fill theater seats, but without a solid story they are often short lived and quickly forgotten.

The Three Musketeers just so happens to fall under all of this. Charlie Sheen, Kiefer Suttherland, Chris O'Donnell, Tim Curry and Rebecca De Mornay couldn't bring enough star power to the film to save it from the sinking ship it resulted in being. At a budget of $30,000,000.00 the return of a mere $53,898,845.00 resonated with the words box office failure. 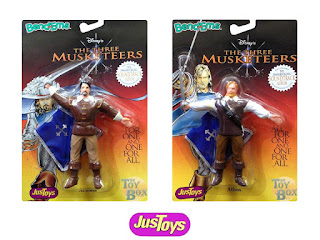 
The short lived film had an even shorter lived toy line which was produced in bendable figure fashion from JusToys in 1993. About the only thing going for this line is that one can complete a set of the Musketeers if they truly desired to...Unfortunately, not many people did (or do). 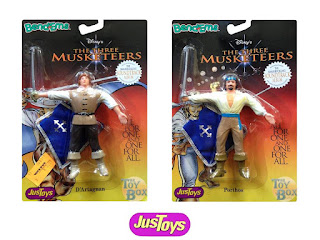 
The figures were quickly shuffled to clearance bins where they continued to remain in stock even at the mere price of ninety-nine cents (or less). Stores couldn't give these things away. 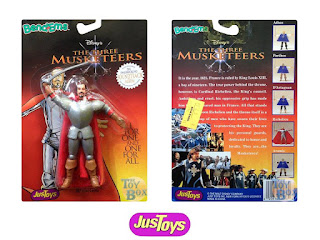 These days the figures fair much better on secondary markets than they originally did on toy shelves. On average you can expect to pay about $10.00 for each one (mint on card). That's not a bad return on a line that was originally shunned to clearance bins.

Click "HERE" to go back to the home page. For more posts related to this one, please click the labels below.
Posted by The Toy Box on June 18, 2018
Email ThisBlogThis!Share to TwitterShare to FacebookShare to Pinterest
Labels: 1990's, Disney, Just Toys, JusToys, The Three Musketeers