Though it's considered a compilation album in the catalog of Michael Jackson music, you actually won't find a greatest hits album. Instead, this is a remixed recording of "lost" tracks from Jackson's Mowtown years.

The year was 1984, and to say Michael Jackson was popular would be an understatement. Thriller, released in 1982, and launched him into orbit. As fans waited in the winds for a follow up album, which wouldn't come until 1987's Bad, Motown pounced on the opportunity to release Farewell My Summer Love, answering the call. 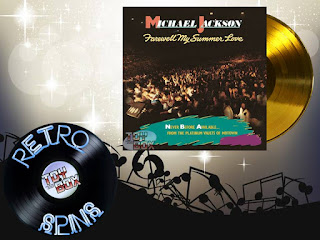 The tracks were all remixed with updated instrumentation overdubs in order to give them a more "current" sound for the era. However, personally speaking, the downfall to this album is Michael himself.

Because the tracks were coupled from various years, prior to the 80's, not only does he not sound like the Michael fans heard in Thriller, but it also bounces back and forth from his puberty voice changing sound, to his still childlike, young adult one. I may be confusing everyone here with this. Suffice to say, it sounds like Michael from The Jacksons era, not pop star.

To be honest, I feel like you really have to like the Motown sound to enjoy this album. It's got that wind and string instrument style, which by 80's standards was pretty dated in lieu of the more popular synth pop sound of the decade. It was certainly a popular release, and even went Platinum in the UK, but at the end of the day, I don't think it was the album fans wanted.

If you're a must have everything kind of Michael Jackson fan, then you have a few options for tracking down this album. It was released on cassette and vinyl in 1984, but unfortunately never saw an official CD release. However, with that said, you can still get all the songs which encompass this album on CD. To do so, look to 2009's Hello World: The Complete Motown Solo Collection. This three disc set not only gives you the original and 1984 recordings from Farewell My Summer Love, but also all four of Michael's solo albums released under the Motown label between 1971 and 1975. Considering you can pick up the CD collection for as little as $15.00 (used), this may be the best route.

Click "HERE" to go back to the home page. For more posts related to this one, please click the labels below.
Posted by The Toy Box on October 29, 2019
Email ThisBlogThis!Share to TwitterShare to FacebookShare to Pinterest
Labels: 1984, 80's Album Review, 80's Music, 80's Music Review, Farewell My Summer Love, Michael Jackson, Music of the 80's, Retro Spins