Sheila E.'s debut album, Sheila E. in the Glamorous Life has Prince's fingerprints all over it. However, this is no surprise considering he wrote three of the six tracks on it, and was featured in some form or fashion lyrically or instrumentation wise throughout all of it. It's also a very rare album to find on CD, and as such, also very pricey. 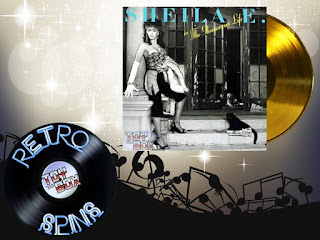 Overall, it's not a bad album. It has that unique sound one would expect to hear from a Prince album of the 80's. However, it's biggest downfall is that it's just okay. In fact, the radio edit of the one and only hit from the album, The Glamorous Life, may actually be more enjoyable at its three minute forty second run time, than the album versions nine minute four seconds. Prince has long had a problem with knowing when songs should stop, and while I have grown to love the "extended" version, the radio edit remains far more superior, because it gets to the point of the song, and moves on.

Going back to what I said about the album having that unique Prince sound, this too is part of its downfall. Sheila E. never really seems to bring her own sound to any of the tracks. It more so ends up being Sheila E. sings the songs of Prince. That's sad in a way, because this also continued into her follow up album, Romance 1600, leaving the question, who is Sheila E.? What is her sound? Unfortunately, we don't find this out.

Don't get me wrong, as I said, the album isn't bad. The Belle of St. Mark, Shortberry Strawcake and The Glamorous Life were definitely the stand out tracks for me, and ended up in my 80's rotation. The remaining three tracks, I could personally take them or leave them. In fact, at this point, I don't even remember how they went.

I've actually had this album for about a year now, but in preparation for this post I hopped over to ebay to check out the availability of it in CD form. It was difficult to find when I was actively looking for it, and while I don't recall what I paid for it, it was fairly steep. However, it appears to have increased considerably since, both in rarity and price. The one and only copy I found online was not only an import, but also over a hundred dollars. That's high! I don't know that I would recommend chasing this down for that price unless like me, this is an absolute must have album.

Click "HERE" to go back to the home page. For more posts related to this one, please click the labels below.
Posted by The Toy Box on October 22, 2019
Email ThisBlogThis!Share to TwitterShare to FacebookShare to Pinterest
Labels: 1984, 80's Album Review, 80's Music, 80's Music Review, in the Glamorous Life, Music of the 80's, Prince, Retro Spins, Sheila E