July 12, 1979. It's the day which became known as the day disco died. It was an ill fated baseball promotion known as Disco Demolition Night in which in between games a crate filled with disco records was blown up on the field. Many in attendance that night came strictly to see the albums blown up rather than watch the games. In the wreckage of shattered vinyl pieces and fans who stormed the field the White Sox would be forced to forfeit the game. Disco was dead.

Or was it? As far as Fantastique was concerned, it was not.

Dutch duo, Dick Dam and Astrid Leuwener unleashed upon the world their debut album, Fantastique in 1982. The album skyrocketed to number one with the help of the power hit, "Mama Told Me, and with it came all the fame and fortune one would expect from an overnight triple platinum album. The high profile lifestyle, back to back worldwide tours, and of course, decades of continuous albums which continued to solidify the band as the number one disco group of all time.

Sadly, none of that is true. The reality of it is the duo release their debut album, then sank into obscurity, never to really be heard from again. 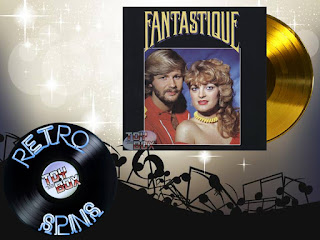 The only way I came to know anything about them or their music was when I heard Mama Told Me on a radio station who prided themselves on playing obscure hits from the 80's. It wasn't a bad song at all. It was catchy, peppy, and if you're into that sort of thing, something you could definitely dance to.

I kept the track on my mind for a few days after hearing, and decided I would attempt to look for the album. This, I found, would be quite a challenge. Twelve inch and forty-five's were somewhat available, but I wasn't about to pay $10.00 to $12.00 for a single. Let alone a vinyl one.

After a bit more digging, I finally came across a vinyl version of the album, but the seller wanted $30.00 for it. I passed on it.

Quite a bit of time passed, a few months or more, and I finally made my way back around to this album. That's when I stumbled upon something I never expected to find. A CD pressing of it - From Russia no less. This made sense as the band had much greater success overseas than they did in the USA, where they were relatively unheard of.

The album is what I expected it would be - Disco, disco and more disco. Think of it as sounding familiar to ABBA, if you will. If you like ABBA, then chances are high you'll like this.

Other than Mama Told Me, I added four additional songs out of seven to my iTunes 80's shuffle, Maria No Mas, Musica Fantastique (a real jammin' instrumental track), and Everybody Loves the Sunshine. I was honestly surprised at this, and can honestly say it was worth picking up.

Click "HERE" to go back to the home page. For more posts related to this one, please click the labels below.
Posted by The Toy Box on October 01, 2019
Email ThisBlogThis!Share to TwitterShare to FacebookShare to Pinterest
Labels: 1982, Fantastique