When the band debuted on US shores in 1981 with their self titled album, Duran Duran failed to find a foothold. Despite having tracks Girls on Film and Planet Earth, which would become two of the band's best known tracks, the English quintet would have to wait until its 1982 album, Rio, for Americans to take notice. With the success of this follow up album, the self titled debut was re-released in the states again in 1983. This time, it soared all the way to the number ten spot on the charts.

I have to wonder, in light of all this, if some people in America actually thought Rio was Duran Duran's first album. Back then , we didn't exactly have the benefit of, you know, the internet.

This is another head shaking moment for me. I own every single studio album which Duran Duran has ever released...but...This is the first time I'm making an effort to listen to any of them from start to finish. What have I been doing with all of my time? I don't know, but let's get into this one.

The record comes out hard with Girls on Film, and then follows up with Planet Earth. A great start, if you ask me. Anyone Out There, or track three, quickly became one of my new favorite songs from the band. 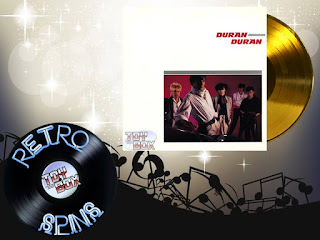 Things slow down a bit with the down tempo, To the Shore. It wasn't terrible, but it also wasn't catchy enough to leave me worrying about ever hearing it again. Careless Memories goes in the opposite direction, throwing the tempo in high gear with its catchy beat, and chant-able chorus. I went ahead and threw it into my 80's shuffle, and will have to listen to this one again before I make a decision as to whether or not it's a keeper.

I was hooked on Nick Rhodes intro to, Night Boat, right from the start. As this progressed, I only got more exited with Roger Taylor's drumming, which fades in with a trance like beat. Enter John Taylor's bass to keep me hooked. A little bit of Andy Taylor's guitar growls to life, edging you closer forward on your seat. Then Simon Le Bon comes in....and kind of ruins everything. This could have easily been my favorite track on the entire album, had it been an instrumental tune.

Whether it was a result of Night Boat bringing me crashing down from my Duran Duran high, or my overall personal tastes, the remaining songs ,Sound of Thunder, Friends of Mine and Tel Aviv sank into the pit of annoying noise. As far as I was concerned, the album couldn't end fast enough at this point. However, with a run time of approximately fifteen minutes between the three remaining songs, this was a somewhat slow torture to sit through. In the back of my mind, I really wanted something to come out of nowhere and slap me upside the back of the head with a song so good I'd play it again. Sadly, this didn't happen.

Overall, not a mind blowing album. The first three tracks set a pace which can't be kept, and an expectation which simply can't be met. Duran Duran's debut is definitely a foreshadowing of what to expect from the band throughout their multi decade career. However, so far, it doesn't contain anything I necessarily need or can't hear off of a greatest hits compilation. I certainly hope their follow up albums are more impressive than this.

Click "HERE" to go back to the home page. For more posts related to this one, please click the labels below.
Posted by The Toy Box on October 15, 2019
Email ThisBlogThis!Share to TwitterShare to FacebookShare to Pinterest
Labels: 1981, 80's Album Review, 80's Music, 80's Music Review, Duran Duran, Music of the 80's, Retro Spins