The Jacksons Victory album is monumental. It's the only Jackson's album to feature all six brothers as an official group. However, it's also interesting it came to be, since the brothers rarely saw each other to work on it together. It contains mostly solo tracks which each member worked on during the time of its recording, and here and there others sang back up.

This could in turn prove to be the albums greatest strength. From my perspective, Victory is one of the Jackson's best pieces of work. Michael steps aside, allowing each brother to showcase their own strengths as an artist, and with it, we get some great tunes; Torture, Wait, State of Shock, We Can Change the World and Body are all tracks I really like from this record. In fact, the weakest from the bunch for me is Michael's solo, Be Not Always. It's just so bland.

When the brothers do come together to lend back up vocals, it works fantastically. My personal favorite from the album, Wait, only gets all the more better when Michael steps in with a great, "My pride" line as Jackie continues to sing the main chorus. Love it! 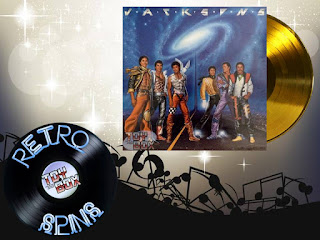 A fascinating fact for me, being a huge Queen fan, is that State of Shock was initially intended to be a duet with Michael and Freddie Mercury. However, I have to admit, Mick Jagger does a fantastic job on it, probably better than Freddie would have. The reason being, after hearing a couple tracks with them singing together, they being Freddie and Michael, their voices don't work in contrast with each other. They're too similar in pitch.

A unique aspect to the cover was the original pressing for the album featured a white dove perched on Randy's left shoulder. This was removed for subsequent pressing, and while no reason was ever provided, many rumors have been churned out for it over the years. Some speculate it was due to Prince's Purple Rain which was released this same year - The track When Dove's Cry specifically. Others will tell you the RSPCA asked Epic to remove it because they feared Michael Jackson's popularity would cause many people to want doves. Then there are those who would say the intentions for every Victory tour was to release doves at the beginning or end of each show. When this plan was scrapped, the bird was removed from the cover. Any of these true? Who knows what the reasoning was at this point.

It's a shame the brothers never came back together to record an album as a "full" group. The closest we got was 1989's 2300 Jackson Street which featured the song of the same name, and brought with it not only all the brothers, but all the sisters (excluding Latoya who was an outcast at the time for appearing in Playboy). The remainder of the album only included Jackie, Jermaine, Tito and Randy. Coincidentally, it's also the final Jackson's album to date.

At least we'll always have Victory, and I'll take that as...um...a victory.

Click "HERE" to go back to the home page. For more posts related to this one, please click the labels below.
Posted by The Toy Box on October 08, 2019
Email ThisBlogThis!Share to TwitterShare to FacebookShare to Pinterest
Labels: 1984, The Jacksons, Victory