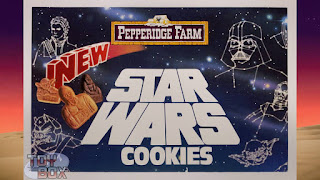 It all began with a fantastic poster in the glass window of my local grocer, and from the door to the check out stand I kept asking for Star Wars cookies. Though my young mind wasn't attuned to the various brands of cookie manufacturers out there, I knew those classic faces staring at me in all their cookie glory form. Princess Leia, Han Solo, Luke Skywalker, Darth Vader and all the other fantastic characters from the recently released film, Return of the Jedi.

Though the cookies were short lived, limited to a small window in 1983, I ate many a boxes of The Rebel Alliance I (vanilla), The Rebel Alliance II (peanut butter) and The Imperial Forces (chocolate). Emblazoned in  cookie form were all my favorite characters, and I relished in biting the heads off of each one as I chomped and chomped through delicious box after delicious box. It was after all the 1980's, and excess was in!

Of course, one doesn't just rip open a box of Star Wars cookies as a kid and dive right in, gorging on them fistful after fistful. Nope. As a kid, my first and foremost thought was to play with them. This is why I would have to strategically pick out an assortment of the various flavored characters. To me, they were more than cookies. They were edible action figures, and I would first have to have an adventure before having a snack.

The Rebel Alliance I, or  vanilla flavor if will, was my favorite out of the bunch. Mind you, not for the taste. No, my heart belonged to a different flavor. Rather, what I enjoyed most about this particular box was the characters inside. All the iconic characters; Luke Skywalker, Yoda, Han Solo, Princess Leia and Wicket. If nothing else, the box was a shear delight to pick through just to find one of each cookie. 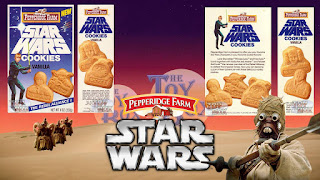 I never was, and to this day still am not, a fan of peanut butter flavored cookies. However, the fact that the these were stamped out as Star Wars characters was enough for me to dig fist first into the box to pull out the likes of Chewbacca, R2-D2, C-3PO, Admiral Ackbar and Max Rebo...Wait, Max Rebo? Had anyone at Pepperidge Farm even seen Return of the Jedi? 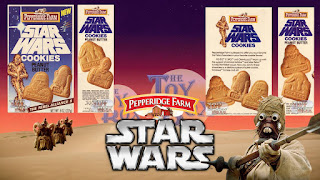 My favorite flavor was always chocolate, or more correctly stated, The Imperial Forces. Not only did they have the best flavor, but also some of the best characters. Darth Vader, Jabba the Hutt, Bib Fortuna, Gamorrean Guard and Emperor's Royal Guard. Once again, I have to ask. Did anyone at Pepperidge Farm see the film? There's a big difference between Imperial Forces and scum and villainy. 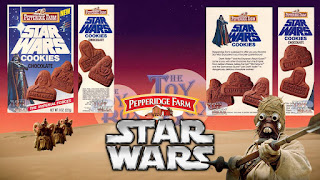 Prior to the line being discontinued, Pepperidge Farm ran a promotion for plastic tumbler featuring "scenes" from Return of the Jedi. The first cup, the Ewoks, was made available in stores, and came free with your purchase of a box of cookies. The remaining four cups were only available by mailing in the cardboard certificate located on the back of specially marked boxes, as well as the ingredients label of three Pepperidge Farm Star Wars cookie boxes. 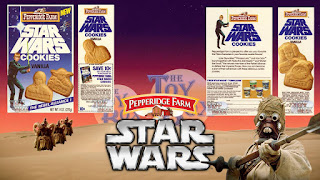 With the promotion came a slight redesign of all three boxes, which now included the certificate on the back of the box as well as a coupon for ten cents off on box located on the side panel. 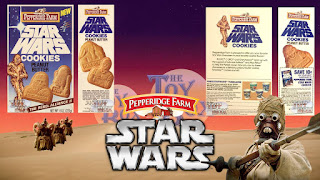 These would be the final boxes produced for the cookies, and no new characters (shapes) or flavors were ever introduced. Like a good cereal based on a Saturday morning cartoon, in the blink of an eye they were gone. 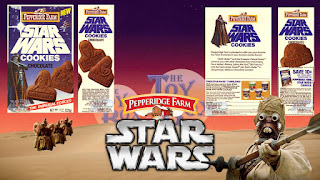 Here's a look at all five of the tumblers which were made available during the promotion. 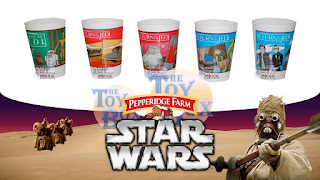 Boxes are getting harder and harder to find these days. Regardless of the flavor, an empty one can set you back anywhere from $35.00 to $45.00. Because the cookies have either gotten infested with worms and / or become so brittle over time that they lost their shape and detail, it's not really worth it (in my opinion) to track down a sealed box. It's just going to cost you considerably more - If you can find one.

I'm not a big fan of collecting food related merchandise, but I have to be honest, there were some pretty awesome Star Wars tie-in's back in the day that intrigue me enough to go searching to pay real money for empty cardboard boxes.

Click "HERE" to go back to the home page. For more posts related to this one, please click the labels below.
Posted by The Toy Box on October 21, 2019
Email ThisBlogThis!Share to TwitterShare to FacebookShare to Pinterest
Labels: 1980's, Cookies, Food, Pepperidge Farm, Star Wars