I feel it's premature reviewing this CD because quite honestly I should first be reviewing the DeBarge album, Rhythm of the Night, as it paints quite the picture for things to come for the band, the family and the solo career of El. But....Meh.

Despite the success of the band, Gordy Records a division of Motown, was growing increasingly annoyed with the publicized drug use of many of the family members and subsequently their unreliability as a result. Additionally, the label saw more talent and marketability in both El and his sister Bunny. As such, the decision was made to drop the group from the label and focus on solo careers of the two sibblings. 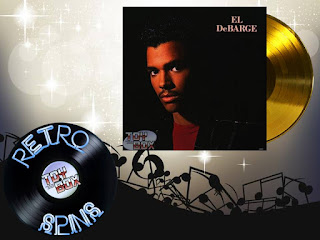 El released the song, "Who's Johnny" for the hit movie Short Circuit which hit theaters in May of 1986. However, for whatever reasoning there was behind it, the film never released a soundtrack. This paved the way for El to release his debut self titled album in 1986 which featured the song as the first track.

Unfortunately, whatever Motown saw in El didn't seem to translate over to the actual album. It's pretty boring, bland and full of ballads. Triple B! It's got a couple tracks which stand out as better, but none are as catchy as Who's Johnny nor as commercial. Overall, I found myself just needing this album to end so I could go on with my life. It was kind of torturous to have to sit through it.

Who's Johnny charted in April of 1986 and went all the way to number three by July before drifting back down the charts. The follow up single, Love Always, charted at number eighty-eight and peaked at number forty-three before disappearing. The third single, Someone, entered the charts at number ninety in December, but lasted one lone week before exiting.

Regardless of having three songs hit the charts, I'll stick with just the one, Who's Johnny, and in minimal doses. It's not exactly a mind blowing track, but it's fun 80's music.

Click "HERE" to go back to the home page. For more posts related to this one, please click the labels below.
Posted by The Toy Box on January 29, 2019
Email ThisBlogThis!Share to TwitterShare to FacebookShare to Pinterest
Labels: 1986, 80's Album Review, 80's Music, 80's Music Review, El DeBarge, Music of the 80's, Retro Spins