Zero To Three Hundred In One Accessory

These past few years of collecting G.I. Joe figures has been a lot of fun. I've enjoyed picking up all the great characters I never had as a kid while also grabbing up a fair amount of the ones I did. I set out to collect strictly within the realm of 1983 to 1987, and while I haven't obtained EVERY figure from this era (nor do I intend to), I've certainly rounded out my collection nicely with all the "priority" figures I wanted.

As I flip the page, so to speak, to a round of secondary figures I had my eye on, I thought I would share with you the first one from that list which I not only just got, but which also almost killed my desire to collect Joe's any further.

As a character, Heavy Metal is not a forefront player in the G.I. Joe world. He appeared in only a handful of episodes, and in addition, wasn't a mainstay in the original Marvel Comics series. Yet somehow, the figure has come to be known as the rarest figure to obtain complete by collectors of the vintage Joe three and three fourths line.

Why? Because of his accessory. Take a closer look. 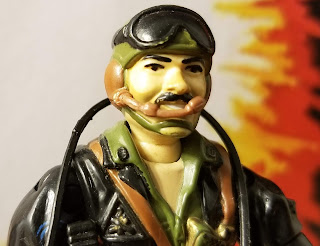 This itty bitty microphone attached to the side of his head was conveniently removable, making it one of the most common pieces lost in most children's toy collection.

I didn't know any of the above about this figure when I first went looking for him. My mindset was, "Meh, another relatively unknown character from a vehicle which will cost me a few bucks to get." Boy was I wrong.

First and foremost, when I went looking for him, there was only one listed with the original microphone. Fortunately, it also include his submachine gun and, while I didn't necessarily want it, the file card. The price - $295.00!

The fact that this figure was so obscurely rare only lead to my desire to have it all the more. With the photos above, I guess it's also obvious that I ended up taking the plunge on it. However, this came with an immediate aftershock which hit me hard. It killed my desire to want to hunt down anymore G.I. Joe figures, and somewhat derailed my passion for the line.

I suppose I could say, "The damage is done. The figure is in my collection." But, at the same time I can't help but take a step back and look at the big picture. I can't keep doing this with this line. I can't keep dropping so much cash on one figure. That's just plain ridiculous. Twenty bucks here and there? Sure. Fifty plus? Probably need to rethink how badly I want it. A hundred plus? Really need to find something better to spend my money on.