Though I've read minimal issues of Judge Dredd and wasn't particularly a fan of the original or remake movies I still feel oddly drawn towards the character. He's just so cool.

The irony of Dredd, is while the character has been around since 1977 when he was created by writer John Wagner and artist Carlos Ezquerra, there's honestly not that much merchandise out there for him. Toys are rather slim pickins'.

Mattel released the Mega Heroes: Judge Dredd line in 1995 to coincide with the Sylvester Stallone film. However, in doing so, they made the two inch figurines more so representative of the comic book version. As such, it's not really a tie in product. More so a stand alone one. 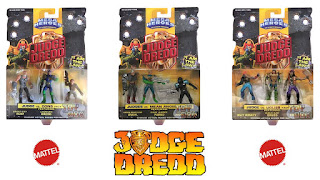 
The downside of course to these being such small "figures" is that the pose they are sculpted in is the pose you're stuck with. They can also be a challenge to display because in the wrong spot they can go relatively unnoticed (out of the package). I do have to say, the best way for displaying figures like this is how I found them in one person's collection. He had taken them all out of the packages and tucked them inside a Judge Dredd pinball game. Not a bad idea - If they don't fall over or encumber the gameplay. 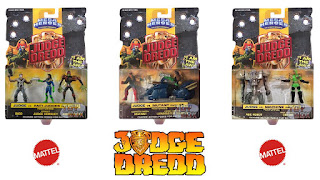 
Of course, if bigger is your thing, Mattel also produced a twelve inch Judge Dredd statue for the line. Much like the figures, and obviously because it is a statue, it too is limited to the pose in which it is sculpted in. 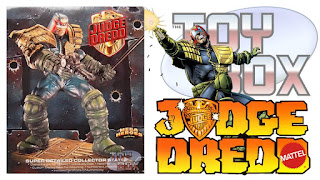 If Mattel was only producing figurines and status, where does one get an actual Judge Dredd figure? I'm glad you asked! Look to the 1999 2000 AD line to fill that void for you. However, if the figurines appeal to you, rest assured you can find them very, very cheap. They can sell for as little as $2.00 a piece, mint on card. It's the twelve inch statue which is going to hurt. It's typically priced at $200.00, but usually sells for around $150.00.

Click "HERE" to go back to the home page. For more posts related to this one, please click the labels below.
Posted by The Toy Box on January 14, 2019
Email ThisBlogThis!Share to TwitterShare to FacebookShare to Pinterest
Labels: 1990's, Judge Dredd, Mattel, Mega Heroes