Welcome, welcome, welcome! A new year and a new look for Retro Spins! It's hard to believe it's already 2019. Seriously, where does the time go? It's almost frightening how quickly the clock runs sometimes. But, if we can't slow it down physically, well, then we'll do everything we can to slow it down mentally by jumping head long into the 80's every week with an album review!

This year we're going to be primarily looking at some albums which have become a little scarce in CD format out there in the wild, but we'll also hit some classics as well as our favorite one hit wonders to see if we can find any gems on their full albums. We'll kick it off right here and now with the self titled debut album from Animotion! 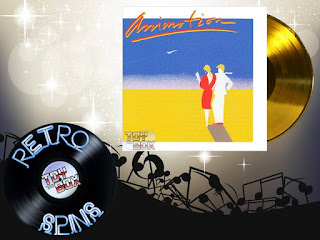 Animotion was (or is depending on how you look at it "is") a Los Angeles based synth pop group led by the duo Astrid Plane and Bill Wadhams. Their most notable success came from their hit Obsession which debuted on the charts in January of 1985 and went straight to the number four spot by May of that same year. Though the band had mild success with another hit from the album, Let Him Go, it never saw the success of the prior track and only reached number forty-one on the charts.

An interesting side note to the album is that if you were from Canada, the record was actually released under the title, The Language of Attraction. Believe it or not, this version is even more difficult to find than the self titled format released in the US.

Overall the album has a fun 80's pop note to it. Astrid and Bill combine their voices together in a way that blends pleasantly well making every song a duet. However, where it suffers is that beyond the opening track, Obsession, there's really nothing that stands out as something you would need to listen to more than once. It was enjoyable, it just wasn't memorable. I didn't end up adding anything to my iTunes playlist or iPod. This was disappointing because the album was by no means bad.

I may have to wait a little bit and give this album another playthrough before totally writing it off.


Click "HERE" to go back to the home page. For more posts related to this one, please click the labels below.
Posted by The Toy Box on January 01, 2019
Email ThisBlogThis!Share to TwitterShare to FacebookShare to Pinterest
Labels: 1984, 80's Album Review, 80's Music, 80's Music Review, Animotion, Music of the 80's, Retro Spins
Newer Post Older Post Home