Candy, toy and utility belt all in one!

Phoenix Candy & Toy Co. covered all these bases when they released these highly coveted Batman Candy & Toy boxes in 1966. Each box featured corn starch based candy as well as a non-Batman Cracker Jack like toy inside. 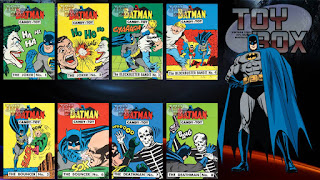 Once you finished eating the candy and losing the toy, you could follow the directions on the top of the box which showed you how to string six of them together to make your own Batman utility belt. Needless to say, between getting thrown out in general and worn / destroyed by kids, not many of these boxes exist in pristine condition these days.

I was turned on to these particular boxes by Brian over at Cool and Collected when he posted about a full set being available on Hakes. As I looked into them, I quickly found these were not the collectible for the faintest of hearts. A full set of empty boxes can run you between $400.00 and $500.00. Whew! Sure they look awesome, but that's a lot of money for empty boxes. 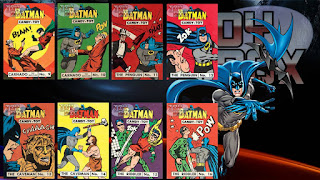 Still, they're fun to look at as a result of all of that fantastic artwork surrounding almost each side of the box. It really captures the fun and excitement of Batman from the 60's. There are a slew of iconic, sometimes goofy villains and characters showcased on each box with of course Batman and / or Robin.

Though it may look like there are sixteen different boxes, there are actually only eight. Each consecutive even number shares the package with its prior odd number. So for example, number one is shown on the front of the box, while number two is the backside to that box. Rinse and repeat for numbers two through sixteen.

I can understand why not many people are eager to take the plunge on something like this. After all, they are just expensive empty cardboard boxes. However, at the end of the day aren't action figures just hunks of painted plastic?

Click "HERE" to go back to the home page. For more posts related to this one, please click the labels below.
Posted by The Toy Box on January 28, 2019
Email ThisBlogThis!Share to TwitterShare to FacebookShare to Pinterest
Labels: 1960's, Batman, Candy, Candy & Toy, Candy and Toy, Phoenix Candy & Toy Co, Phoenix Candy and Toy Company, Toy