Presumably around the time frame the Jacksons were recording their 1984 Victory, Jermaine was hard at work and consecutively working on his 1984 self titled Jermaine Jackson album. This presumption is due to both of the albums being released mere month's apart. 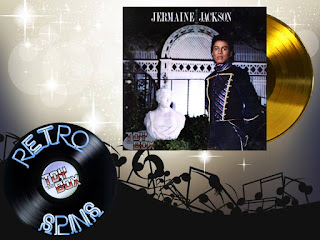 The self titled album still delivers solid tracks - Some of which turned out to be chart toppers themselves. The first hit came in the form of Dynamite, a hard hitting pop track which debuted in July of 1984 at number fifty-five. Unfortunately the track would only make it to number fifteen before dropping back off the charts. The song was followed by Do What You Do which charted in October which climbed to number thirteen by January 1985 before slipping down and off the charts.

An interesting side note to the album is that the international release was actually entitled, "Dynamite". This version is not only the easier to find on CD, but it's also cheaper and contains the radio edit version of the Pia Zadora duet hit, "When the Rain Begins to Fall". As such, personally speaking, the international version is a little more desirable to own.

It's unfortunate Jermaine never saw the type of solo success he found with his brothers. It's even more so odd the song from the album, Tell Me I'm Not Dreaming, which featured his brother Michael never hit the charts.

Overall the album is pretty good. I ended up grabbing six of the nine tracks; Dynamite, Sweetest Sweetest, Tell Me I'm Not Dreaming, Come to Me (One Way or Another), Do What You Do and Some Things Are Private. Granted these songs are by no mean commercial air play songs. They're enjoyable, but not necessarily catchy (if you know what I mean). It's by no means in the category of Michael Jackson's Thriller, but then again, was it supposed to be?

Click "HERE" to go back to the home page. For more posts related to this one, please click the labels below.
Posted by The Toy Box on January 15, 2019
Email ThisBlogThis!Share to TwitterShare to FacebookShare to Pinterest
Labels: 1984, 80's Album Review, 80's Music, 80's Music Review, Dynamite, Jermaine Jackson, Music of the 80's, Retro Spins