I love receiving ebay gift cards for Christmas. It's like having a whole other Christmas celebration after the fact by getting to go online and find all the more great stuff to add to my collection.

Anticipating getting my annual haul of gift cards, I actually plotted out just how I would use them in the days leading up to Christmas. I wanted to accomplish two things. Number one was to finish my Cobra wants from G.I. Joe, and also grab a couple from the Joe team which were necessity figures in my collection. By necessity, I mean ones which made frequent appearances in the show.

For number two, I was hoping to finish off my "primary" list of Nintendo Entertainment System cartridges. I don't think I've ever mentioned this before, but I have three lists currently for NES games. First is the primary list, which encompassed sixteen games. These are titles I absolutely love playing over and over and over on the console. Second is my secondary list, a larger list of twenty-seven games. These games hold a special place in my childhood, and also would round out my collection. Last, is my clean-up list, which consists of thirty-seven games which were part of my NES collection as a kid which I would like to eventually re-obtain. 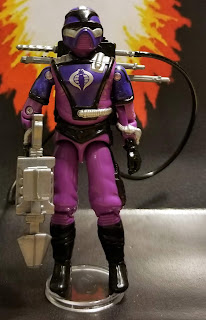 Techno-Viper has an interesting history in my original Joe collection. It was actually a figure I used in the fifth grade for a class project. My dad and I made a sarcophagus, wrapped the figure in gauze plaster and turned him into a mummy. While I got an A+ on that assignment,  the end result was being down one figure. Needless-to-say, I won't be doing any craft projects with this one. 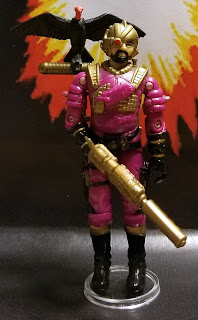 Voltar is one of those figures from the 1987 line that I don't think a lot of people give a second thought to. He's by no means a major player, and in fact, I don't think he ever even made an appearance in the cartoon. He did however make an appearance in the comics, issue number eight-seven being his first, and was also a character in the 1991 NES video game from Taxan.

It's rather idiotic how one accessory can turn a relatively unwanted $20.00 figure into a $100.00 one. Sadly, this is exactly the case with W.O.R.M.S., the driver of the Cobra Maggot. See that tiny little antenna on his helmet? Well, it just so happens to be detachable, and as a result, is missing on several of these figures. There are probably more W.O.R.M.S. figures out there without the antenna then there are with it. As a result, this is one of the figures who people have started making reproduction parts for. Thankfully, mine is not a repro.

Ferret was a figure I initially laughed at. This was because I only knew of him based on his file card picture. He looks goofy on it. Almost like a 1980's Flash Gordon character. Then I pulled the actual figure up on ebay and decided at first glance I wanted him.

Much like Ferret, I had no interest in this figure until seeing it on ebay. Also, much like Ferret, once seeing it, I immediately wanted to add it to my collection. It too has that awesome "pop" of red, gold and black paint. With its purchase, I wrapped up my Cobra want list.

Lift-Ticket took me a little time to track down because, much like W.O.R.M.S., he's one of those figures that goes from cheap to expensive based on one little itty bitty accessory which tends to go missing - the microphone on the side of his helmet. However, unlike W.O.R.M.S., Lift-Ticket is a figure many Joe collector's want. I nabbed this particular one mint in a sealed bag for the same price other sellers were asking for it complete, but loose. 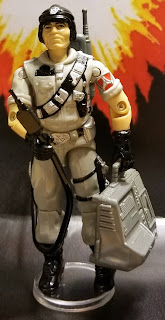 As I made my way through season two of G.I. Joe, I wanted to get myself Mainframe more and more. I didn't realize he was such a mainstay on the show. A great perk to finding this figure was the connection I made with a particular seller on ebay who specializes in vintage Joes. I've actually purchased several figures from him over the course of the past couple weeks.

Airtight is a figure I've been wanting for a while, but others always seemed to take precedence to me. I don't know what it is about this character, but I really dig him. Even after reading his file card, I'm not to sure what he contributes to the Joe team.

It was actually annoying to me that I had yet to add Footloose to my Joe collection. He was always in my list of wants, but pretty far down the list. One day, it started gnawing on me that I didn't have him, and even then it took me a couple months to rectify.

With this haul, and one I made from my new favored ebay seller, I am down to just nine more figures from my initial want list of Joes. Cobra's all wrapped up.

One thing I'm highly considering is a list of twenty-three additional figures. The reason for this is because I had these particular ones as a kid, and I'm somewhat interested in having them just for the sake of, well, having them. In all honesty, I probably will go ahead and get them. I don't know if I'll bother with anything past 1988, even though I did have some figures from 1989 and 1990. We'll see. If I was going to get more G.I. Joe's, it would probably from the list of forty+ figures between 1983 and 1988 which, for now, I'm passing on.

NINTENDO ENTERTAINMENT SYSTEM GAMES
Thanks to my girlfriend getting me Mike Tyson's Punch-Out for Christmas, there were only three more cartridges on my primary list of wants for my NES collection. I was fortunately able to get all three of these with my ebay gift cards. 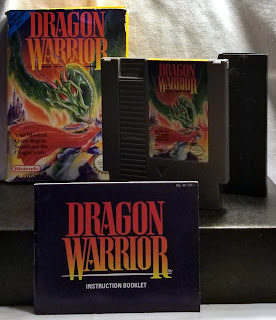 The box wasn't in the best of shape it could have been, but I wasn't about to pay $20.00 more just to avoid some blemishes. Especially since I keep my games in plastic cases anyway. 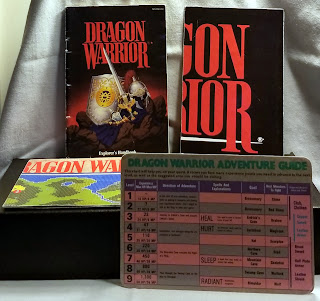 This game came with so much stuff packed in, I couldn't fit it all in one photo. 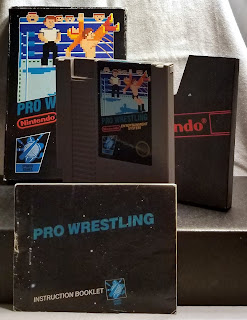 Pro-Wrestling is NES perfection in a wrestling game. It has an amazing cast of characters, all unique in their own way, and the controls are simple enough for everyone. Having a turbo controller also helps.

Even as a kid, I was a bit sadistic when it came to playing this one. I would beat on my opponent until they literally couldn't stand up. Then I would pin them. 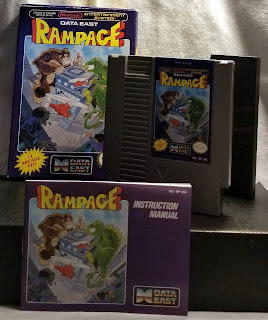 As  a kid, I was by no means as big of a Rampage fan as I am in my adult years. I don't know when it happened, but I have grown to really enjoy this game - a lot. It's a shame the NES version could only accommodate having two of the three characters in it.

This wraps up my Christmas gift card purchases, and it's not a bad haul, if I do say so myself. It doesn't top last year's spree, but it crosses off a big portion of my current want list. Definitely happy with everything I was able to get.