David Bowie's Let's Dance is an important milestone album for me. While many people have been enjoying this album since April of 1983 I have never heard any of his albums until obtaining this one recently. Sure, I've heard Bowie's hits played here and there on the radio and they were decent. However, up until Let's Dance, I've never actually owned or listen to a Bowie album - Well, unless you count the Labyrinth soundtrack. I don't.

Bowie's first single from the album, Cat People (Putting Out Fire) charted a full one year ahead of the album being released. However, this was due to the fact the song appeared not only the album to come, but also from the movie soundtrack to Cat People. So really, does this one count?

Whether it does or doesn't, it wouldn't be the only song to chart from what would quickly become Bowie's most popular album of the 80's. Let's Dance (the song) hit the charts in March of '83 and flew up the charts to the number one spot by May, knocking Michael's Jackson's Beat It down to number two. 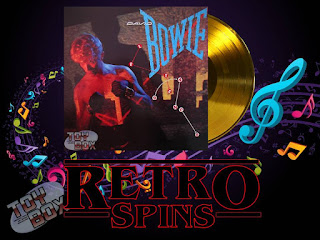 While the track remained in the top ten, China Girl joined it on the charts in June. The two songs would pass each other in the charts in July as China Girl continued its way up while Let's Dance slowly drifted off the charts. The song would make it to number ten by August, but then started to drop off as well.

However, this wouldn't be the last hit from the album. Modern Love jumped on the charts September and climbed up to number nineteen before beginning ts descent back down. It wouldn't be until March of the following year that yet another track from the album would chart; Without You. However it would disappear a weak later. Bowie wasn't out for the count yet as songs from his follow up album, Tonight, would begin charting shortly after.

So how was it? Am I David Bowie's latest fan? Will I be tracking down further albums?

It was pretty good. Not necessarily. Probably.

The album fires off three singles right in a row; Modern Love, China Girl and Let's Dance and sets the tone for a fantastic listening experience. Unfortunately, it then takes a little dip and suffers for a couple songs before coming back towards the end with Criminal World and Cat People (Putting Out Fire). Long story short, five of the eight tracks made it to my IPOD.

After giving it a listen, I'm intrigued to want to track down some other Bowie stuff - Most likely hitting a few more from the 80's before venturing off into "classic rock" territory. Though I may be asking for trouble going this route as in reading about Bowie's two follow up albums to Let's Dance it seems as though the general consensus was that they weren't good. Well, I'm a fan of finding out for myself. So until then...

Click "HERE" to go back to the home page. For more posts related to this one, please click the labels below.
Posted by The Toy Box on September 11, 2018
Email ThisBlogThis!Share to TwitterShare to FacebookShare to Pinterest
Labels: 1983, 80's Album Review, 80's Music, 80's Music Review, David Bowie, Let's Dance, Music of the 80's, Retro Spins