I've been of the mind for some time that Journey's Don't Stop Believing has got to be the most overplayed song of all time. In fact, in general Journey's hits see far too much radio play to the point that I actually don't even enjoy them all that much anymore.

As a result, I honestly never owned a Journey CD (or album in general) until just recently when I decided it was time to see if there was more to this band than just the overplayed hits. I picked up three albums, Departure (1980), Escape (1981) and Frontiers (1983). The irony behind this is that out of all their albums, these three contained the most hits. Hear me out though. I at least felt if the albums didn't pan out for me I would at least have a handful of good Journey songs vs. having three coasters.

Of course Any Way You Want It from the album was a big hit for the band. It debuted in March of '80 and fired up the charts to number twenty-three by May and then oddly enough dropped all the way down to forty-one the following week. Ouch. 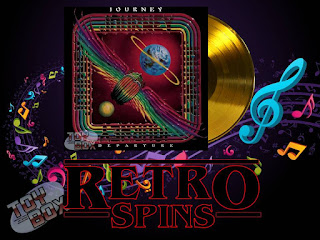 Walk Like A Lady debuted a week later and made its way to the low thirties. However, much like Any Way You Want It dropped back into the forties a week after. This hit was followed up by Good Morning Girl / Stay Awhile - Which actually are two separate songs. However, due to the minimal length of the two tracks they received back to back airplay. The song(s) debuted in August of '80 at number eighty-seven, but were off the charts by the following week.

I honestly wasn't impressed with the album as a whole. In fact, I'm very disappointed to say Any Way You Want It was really the only song I liked. The rest were just there. It was really unfortunate.

Any Way You Want It kicks the album off and with it sets a tone and expectation of powerful tracks with hard guitar riffs and Steve Perry's monster voice. Sadly, the rest of the tracks falter under a feeling of being unpolished, accompanied by an overall lackluster sound - both in instrumentation and lyrics.

Going into it, I wasn't really expecting much from Journey's Departure. However, I was expecting something more than one "good" song. As a result, I'm not really pumped to listen to the other two albums I picked up. I'll get around to them, but they're not high on my list at this point.

Click "HERE" to go back to the home page. For more posts related to this one, please click the labels below.
Posted by The Toy Box on September 25, 2018
Email ThisBlogThis!Share to TwitterShare to FacebookShare to Pinterest
Labels: 1980, 1980's, 80's Album Review, 80's Music, 80's Music Review, Departure, Journey, Music of the 80's, Retro Spins