Have you played the original G.I. Joe: The Card and Dice Game? It's a ton of fun and so simple. The game is designed for one or two players, which means solo missions can still be had!

Each person chooses either the Joe or Cobra team (or the single player takes both decks), shuffles the cards of each deck, and lays them face up in front of them. In addition to the deck, each player is provided a designated dice (or both dice to a single player), green for the Joe team and red for Cobra.

The game is played out in a "war" like fashion, but rather than relying on a number printed on the card to designate who has the highest, this is determined by the dice. The premise is still the same - Be the last player with cards remaining in their deck.

It's so much fun, and can be played virtually anywhere! It's also great for kids and adults of all ages!

Unfortunately, the downside to the game is you're not going to find it on store shelves...Or anywhere for that matter. Why? Because it's a game I invented.

For those of you who have read my Joe posts, you may have caught me mentioning numerous times how in my early teen years I still somewhat continued to play with my Joe figures. Not in a sense that I would set them up all over the house and play out an imaginary story with them. Rather, a simpler game where I separated the Joe and Cobras into two piles, then picked one from each pile at random and rolled a dice for each team to see who the winner was. Sound familiar? You know, like a little aforementioned card game above? 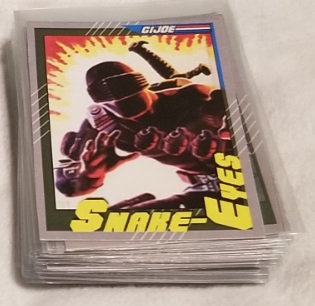 As I was sitting in my toy room, I found myself wanting to play with my figures, but not in a way that would result in people calling out my sanity. This resulted in me grabbing a pair of dice and an empty box, and just sitting in front of the display shelf playing out my childhood game.

When I finished, I thought to myself, "That was still a lot of fun, but how can I make this game something I could do wherever I wanted to?" Thus, the above cards were born.

Utilizing a similar design to that of Impel's short lived G.I. Joe trading cards in conjunction with the cardback and box art for the toys, I came up with the cards. The two decks you see above incorporate all the figures from 1983's 1.5 series through 1987. This includes not only the carded figures, but vehicle drives, mail away and sub-sets - such as Special Missions Brazil, Battle Force 2000, Slaughter's Marauders, Etc. I then printed the cards on a thicker cardstock paper, cut them out and inserted them in Ultra-Pro card sleeves to ensure longevity.

Because some of the vehicle drives are displayed on their boxes somewhat tiny, blowing them up resulted in blurry cards for several of these. However, when I sat back and thought of what my options were, I decided to just leave it. My decision behind this was to essentially conclude if I was a little kid creating this game back in the 80's, this is essentially what would have happened. However, the difference would be that through a child's eyes this would still be pure awesome because the character was still represented.

A downside to the decks was that I quickly found out the Joe's didn't just slightly outnumber the Cobras, rather majorly. There are ninety-nine unique Joe figures in their deck, but only half this amount for the Cobras. This meant I either needed to trim down the Joe team cards or pad the Cobra one. I opted for the latter.

I achieved this by breaking it down by year, and then essentially army building. For example, 1983's 1.5 line has three Cobra figures and thirteen Joe's. A difference of ten. So I printed five additional Cobra Soldier cards and five Cobra Officer's to even them out. I continued to do this for each wave of figures, utilizing the current year's soldier characters on the Cobra team to even out each one. This resulted in an even deck of ninety-nine cards for each team. 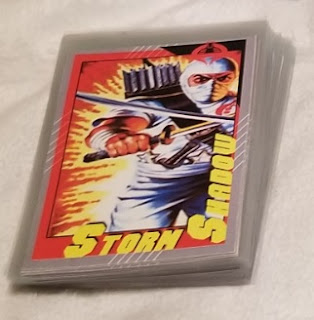 Why only go through 1987? Mainly for me, it's because that's where my interest in Joe figures really ends. There are a few from 1988 I know of, and even owned as a kid, but they're not as special to me as the '83 - '87 era. Also, I really just wanted to get a card set in place so I could start playing. The longer I spent designing each individual card meant I wasn't playing.

I'm sure I'll get around to incorporating '88 - '94 into the game eventually, yet at the same time I'm a little hesitant. Mainly because ninety-nine cards in and of themselves make for a fairly decent length game. Any longer, and it risks becoming boring. In fact, I dare say I need to consider trimming it down to a base set of sixty cards per side, and only incorporating the rest when I have tons of time on my hands - Which isn't often.

For now, I'm content with my little homemade card game. It's not only fun, but nostalgic for me at the same time. For starters, it includes all that fantastic artwork from the packages, and second, it takes me down memory lane of a game from my childhood. It's been fun to find a way to incorporate this back into my life.

If any of you are interested in getting your hands on the file for these cards so you can play too, I have no problem sharing. Drop me a comment with just your e-mail address, which won't be published, and I'll get in touch with you. It may need to come in multiple e-mails due to the size of the file. You will also need Microsoft Power Point to open it, and of course have a way to print all the pages out.

Click "HERE" to go back to the home page. For more posts related to this one, please click the labels below.
Posted by The Toy Box on September 13, 2018
Email ThisBlogThis!Share to TwitterShare to FacebookShare to Pinterest