I've always been a fan of Pretty Poison's Catch Me (I'm Falling) (the song), but had honestly never heard anything else from the group.

While the album (of the same name) was released in 1988 (oddly enough nobody seems to know the month), the single Catch Me (I'm Falling) started flying up the charts by September of 1987. By December it had already reached the top ten, but sadly by January of '88 was already beginning its descent. 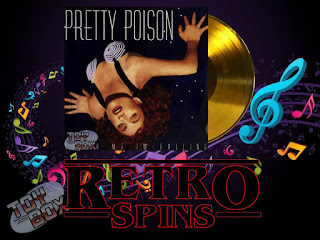 Pretty Poison had a second hit chart in April of '88. However, the track only peaked at number thirty-six before drifting off the charts. It would be the last "hit" for the band and as a result of not many people knowing the song the group remains in one hit wonder status.

As for the album - Well, it's just not that memorable. A lot of the songs sound the same and while some are listenable, they're not necessarily memorable. It's because of this I really didn't find anything beyond the hit Catch Me (I'm Falling) to throw on my IPOD. A shame as I was really expecting to be somewhat impressed with the album based on how good the aforementioned song is.

Not really much more to say beyond that.

Click "HERE" to go back to the home page. For more posts related to this one, please click the labels below.
Posted by The Toy Box on September 18, 2018
Email ThisBlogThis!Share to TwitterShare to FacebookShare to Pinterest
Labels: 1988, 80's Album Review, 80's Music, 80's Music Review, Catch Me I'm Falling, Music of the 80's, Pretty Poison, Retro Spins