Robo Force was created in 1984 by Ideal and released and featured Maxx Steele, the leader of the team. Their enemy - The Cult of Dred! The line was awesome...

...and has absolutely nothing to do with today's entry, Roboforce by Galoob.

Galoob's 1992 line has no backstory. So any premise you want to instill is left entirely to the imagination. Here's one we've created which you can use if you like;

"In the year 8-0 (pronounced oh)-G, a group of robots suddenly find themselves rebooting aboard the floating garbage cruiser The Tyroarus. Among the debris, the remains of human bones from their once live crew, now decease for over a century.

A fateful course is locked in the cruisers autopilot program which will send the ship headlong into the explosive sun of the nearby planet Dagargo. With all systems unresponsive to alter their course, the doomed robots spend the rest of their fleeting days swapping out their bits and pieces with each other in an attempt to at least look as cool as possible before succumbing to their inevitable demise.

What do you think? Oh well, back to it.

If you couldn't surmise from the above write up, the line features eight figures with removable pieces and parts which can be interchanged with each other to create any form of robot you want.

Cool premise. However, with no cartoon to back the series up or any real strong marketing behind the toys they quickly fizzled to clearance bins across the nation. 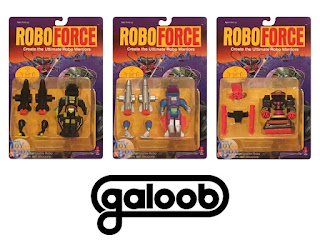 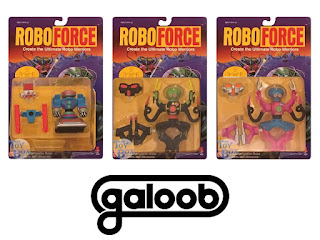 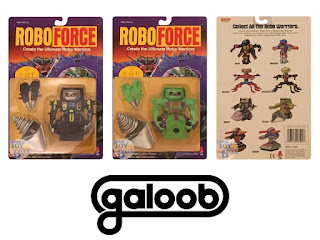 The figures are not too common on secondary markets these days, so it's a little difficult to pinpoint any price points. We've seen loose figures listed for about $40.00 each. However, these do not sell. Whether this is because the asking price is too high or there is simply no interest is unknown. It could be both.

Click "HERE" to go back to the home page. For more posts related to this one, please click the labels below.
Posted by The Toy Box on September 10, 2018
Email ThisBlogThis!Share to TwitterShare to FacebookShare to Pinterest
Labels: 1990's, Galoob, Roboforce