Admittedly we don't know much about AC / DC the band, and we won't pretend to. Beyond a handful of the "hits", we don't honestly listen to their music and even then don't go out of our way to do so. Because of this we won't jump into details on the band itself as we don't want to offend their fans with what would be nothing more than a cut and paste from Wikipedia.

What we do know about is toys, so we'll focus on that factor. 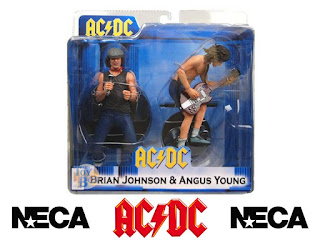 NECA produced a fantastic two pack in 2007 based on lead singer Brian Johnson and guitarist Angus Young. Between the sculpts, articulation and fun accessories you really won't find a better pair of representations in plastic.

Unfortunately, you also won't find them too cheap these days. Much like the many music related lines which NECA has released in the past, this two pack is going to set you back around $90.00 to $120.00. Pretty steep for two figures. You'll have to be a pretty big fan to swallow that price. 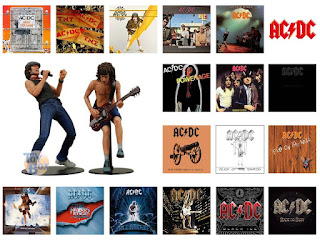 We will say this - The announcement of Axel Rose officially being the front man for tours intrigues us enough that we would definitely check out a live act or even a new studio album (if he were involved). Of course, we also understand that AC / DC purists may find this blasphemous. Believe us, we know how it feels to have some random guy fronting your favorite band. Adam Lambert is currently ruining everything we love about Queen with the help of Brian May and Roger Taylor who seem intent on destroying Freddie Mercury's legacy.

Click "HERE" to go back to the home page. For more posts related to this one, please click the labels below.
Posted by The Toy Box on September 03, 2018
Email ThisBlogThis!Share to TwitterShare to FacebookShare to Pinterest
Labels: 2000's, AC DC, AC/DC, ACDC, NECA