I've taken a slight hiatus from buying toys to really focus on bolstering my collection of comic books related to some of my favorite 1980's properties. If you recall from my visit to Fairfax Comic Con, my collection started, with a bang I might add, with the likes of Masters of the Universe, Thundercats, Transformers and more. You may also recall I am only focusing on collecting issue number 1's (at this time).

These books are so much fun to collect, and not only that, but because the majority of them have no continuity to them, there's really no specific order one needs to collect them in. Again though, I'm strictly focusing on issue number 1's, and I don't honestly know if I'll branch out much further than that.

So let's have a look at what I've picked up since starting off at Fairfax Comic Con. 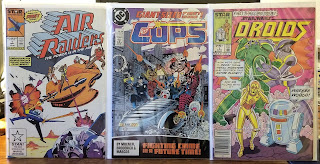 I honestly know very little about Air Raiders. I don't think I ever watched the cartoon, and I never played with the toys. Oddly enough though, I did used to own this exact comic book when I received it as a gift at Christmas time in one of those Sears or JC Penny comic book packs.

C.O.P.S. has easily become one of my most recent all time favorite cartoons from the 80's. Probably because I wasn't inundated with it when it first came out. I watched an episode here and there, but never really made it a point to catch the series when it aired.

Star Wars Droids was out of my wheelhouse when the cartoon originally aired, but since then I've come to appreciate it in VHS and DVD format. It's unfortunate the entire series has yet to be released on DVD. 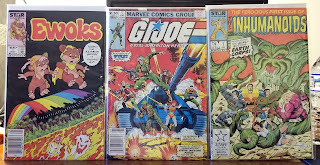 Much like Droids, Ewoks is something I've watched in my later teen years and beyond, but never gave the show much time as a kid.

I've actually tried reading this first issue of G.I. Joe several times online, but could never get into it. I think I only wanted it because it was a staple in a collection such as this. I'll give it another try in traditional paper format and see how it goes.

Another series I know little about, Inhumanoids was also a series I never watch on TV or played with the toys. 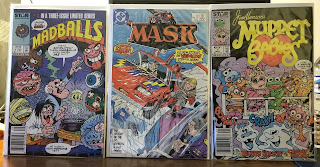 I had a few Madballs as a kid, and they were impressionable enough on me that I've remembered them fondly all these years later. I'm curious to see how the characters actually act in a story scenario.

MASK was big for my brother who collected the toys in droves. For me, I watched and enjoyed the cartoons. Between the two of us, you could say we had all the bases covered.

Who doesn't love Muppet Babies? Even if you didn't like the show, the opening theme with its snippets from movies such as Star Wars and Raiders of the Lost Ark should have been enough to at least get you to give it a chance. Though I'm not a big fan of the Muppets in general, I did enjoy the cartoon in small doses. 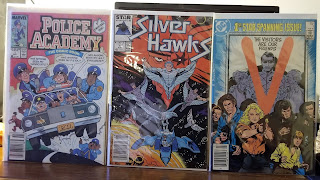 I feel the need to admit this every time I post something about Police Academy - I've seen all six of the theatrical films on the big screen. Mission to Moscow doesn't count as it was never released in theaters. I love the Police Academy franchise, so it surprises me to admit I've never seen the cartoon...Ever.

Silver Hawks is another iconic 80's franchise which I have to admit is out of my realm of knowledge. I was never big on Japanese animation style cartoons such as this, Adventures of the Galaxy Rangers and all those others I can't remember - Because they weren't my thing.

V on the other hand - Oh yeah. I'm all over this one. To this day I make it a point to watch the two mini series, and attempt to make it through the television series every few years. Love it! It's one of those franchise that really disappoints me to know the originally planned toy line of action figures was cancelled. I may have to break my credo of no new toy lines if Funko picks these up in their ReAction line.

All and all, not a bad batch of books. I'm excited to read through each and everyone of these...and it literally just dawned on me I forgot to post a photo of Alf #1...Oh well. Next time.

Click "HERE" to go back to the home page. For more posts related to this one, please click the labels below.
Posted by The Toy Box on September 06, 2018
Email ThisBlogThis!Share to TwitterShare to FacebookShare to Pinterest