Does the world need a Vincent Price figure? Overall sales, and a quick shift to clearance isles claim nay it does not. NECA has always been a brand which makes some relatively obscure figures, and their 2002 Vincent Price certainly fits that bill. 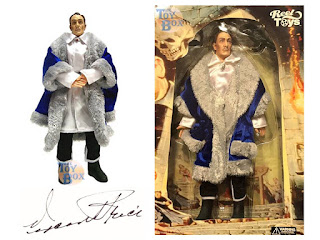 We won't deny Vincent Price is an iconic "star". His voice has been instantly recognizable for decades of fans since the 60's with notable projects such as Michael Jackson's Thriller and The 13 Ghosts of Scooby-Doo - And mind you, those are just two examples from his work in the 80's.

The figure features all that great sculpting, paint and articulation one would expect from a NECA product, so there's no denying there is quality to be had here. It's just that at the end of the day, what does one do with it? Let's face it. You've got to be a pretty large fan of the man to want an action figure based on him.

Reader Phantom Troublemaker let us know the outfit for the figure is that based on Price's appearance as Dr. Erasmus Craven in Edgar Allan Poe's The Raven released in 1963. This aspect could potentially draw in more fans.

The figure came and went relatively fast on toy isles as a result of not only its obscure nature, but also lack of appeal / desire for most toy collectors. These days it's a fairly common item on secondary markets. However, at $35.00 to $40.00 only one in about five ever sell. If you're looking for a Vincent Price figure - Rest assured they're out there for you to find relatively easily.

Click "HERE" to go back to the home page. For more posts related to this one, please click the labels below.
Posted by The Toy Box on August 27, 2018
Email ThisBlogThis!Share to TwitterShare to FacebookShare to Pinterest
Labels: 2000's, Edgar Allan Poe, NECA, The Raven, Vincent Price