Baltimora
Living in the Background
1985

Say now...Where did this one come from? I honestly couldn't believe Baltimora only had one hit when I popped this one in for a spin. It's short and too the point, packing a massive punch as it goes. Out of the six songs only two got thumbs downs from me.

The song Tarzan Boy hit the charts in October of 1985 and flew up to the number thirteen spot by March of 1986. Unfortunately, from there it dropped rapidly. In April of that same year, Living in the Background (the song) reached the low 90's, but was gone by the following week and technically not many people remember this song or the band.

Since then, Tarzan Boy has gone on to be the biggest hit for Baltimora and was featured predominantly in the third Teenage Mutant Ninja Turtles film in 1993. To this day it's a fairly commonly played song whenever references to pop culture or 80's era music are made. Of course nobody ever seems to remember the name of the band. 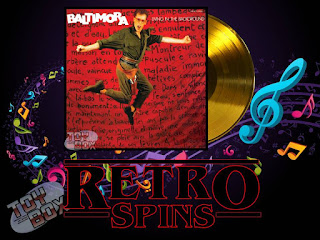 Like I said above, I loved the album - Which really surprised me. I fully expected Tarzan Boy to be the only track worth listening to. I'm happy to say it wasn't and it's not even my favorite from the band at this point. I much rather prefer Living in the Background and Running For Your Love. Woody Boogie isn't a bad track either - Which this paragraph would actually be a list of all four of the songs I took from the album for my IPOD.

As a general rule of thumb I like "original" albums. What I mean by that is I don't particularly care for re-issues which feature bonus tracks. For me, I want to hear the album from start to finish the way the original recording was meant to be heard. However, with Baltimora it is rather difficult to find an original CD. This turned out to be okay as some of the included B-Sides on the re-issue are good too! I added The Jukebox Boy and Up With Baltimora to my IPOD. The album also has many versions of Tarzan Boy on it from remixes to dubs. Personally, I'll stick with the original.

As I mentioned in last week's post, I love hearing albums that leave me asking, "Whoa, what else has this person done?" Unfortunately, this one didn't necessarily pay off - Which was a shame because Baltimora albums are kind of rare and sort of expensive as a result. Their follow up album Survivor in Love was...Well, not so good to put it bluntly. But, I won't go into that album here.

What's interesting about the band in general is that there appears to be a little controversy surrounding who actually sang the songs. Though this is credited to Jimmy McShane it apparently may or may not be so. Sadly as McShane passed away in March of 1995 from AIDS, the true answer may never be known.

Click "HERE" to go back to the home page. For more posts related to this one, please click the labels below.
Posted by The Toy Box on August 14, 2018
Email ThisBlogThis!Share to TwitterShare to FacebookShare to Pinterest
Labels: 1985, 80's Album Review, 80's Music, 80's Music Review, Baltimora, Living in the Background, Music of the 80's, Retro Spins